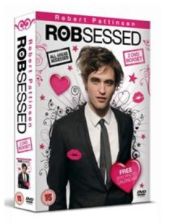 Robsessed is the ultimate 2 DVD boxset that includes the first ever all-access guide to the world’s hottest new star: Robert Pattinson.

R-Patz, as the press has affectionately named him, became an international heartthrob after starring as Edward Cullen in the chart-topping blockbuster, Twilight. Now, Robsessed offers an exclusive, insider’s look into the world of R-Patz, following his path from a young schoolboy, to his early modelling and acting jobs, all the way through to landing his dazzling role in the Twilight saga.

Robsessed also features the stunning movie adventure The Haunted Airman where Pattinson smoulders in this chilling tale that will rattle your nerves and take you on the journey of a lifetime.

Maddy was very excited when she saw this as she loves all the Twilight films, we are big Robert Pattinson fans in this house. The DVD was very interesting and entertaining for us all, the quality is good and we enjoyed watching it very much. I think its good value if you are a fan and Iwill be recommending this to anyone who loves Twilight and the cast! Geraldine Young – Maddy 15 Years

This looks like aprofessionally made video. Unfortunately none of us are Robert Pattinson fans but if you were I think you would find the product very appealing. We only watched the DVD once as we are not really fans of Robert Pattinson. It’s of good value if you are a fan but I would not have bought it for myself, maybe for a gift. The DVD was of good quality and I would recommend to any Rob fans as he is rather yummy! Hayley Greenfield – Kate & Beth Ages 11 & 13 Years

I think the cover suited the film very well. The content was average, nothing exciting or particularly new. We watched the DVD twice as a family and the quality was average. I thought the DVD was too expensive for £9.99 and I would not have bought it. We was a little disappointed, and thought that theproduct would have been a lot more exciting. Rubena Hussain – Sohail 20 Months

I think its good value if you are a fan and I will be recommending this to anyone who loves Twilight and the cast!