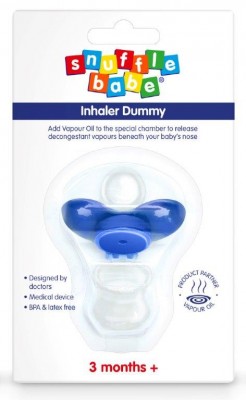 The clever dummy designed to release soothing vapours
Suitable from 3 months
Designed by doctorsSpecial chamber for Vapour OilBPA & latex freeDesigned by doctors, this clever dummy has a specially designed chamber that holds Vapour Oil (sold separately). This means a gentle, safe and steady stream of decongestant vapours are released beneath your baby’s nose while the dummy can help them feel calm. It’s a really clever and convenient way to offer relief at home or on-the-go.

I was highly interested in the product as seemed like such a clever idea and might help my youngest daughter who always seemed to be congested. The packing was simple, suitable for holding the dummy and vapour, and looked professional. Following the instructions was easy, they were clear and concise. I had no problems dispensing the room vapour into the dummy. Chloe was not instantly happy to suck on the dummy. I believe this was because the dummy was shaped orthodontically unlike the dummies which we normally use that are bulb shaped. She quickly adapted to the new shape though. I believe the vapour in the dummy helped Chloe to breathe more easily and was more effective that just using the vapour alone in a bowl of water. I did use the vapour alone in my elder daughter’s bedroom and that did seem to help her breath and sleep easier. Chloe slept happily with the dummy. It helped Chloe sleep through the night when otherwise she would have struggled. Chloe slept better as a result of having of having the vaporising dummy. It really seemed to work at clearing her nose. Both the dummy and the vapour are of a high quality. I like fact that the vapour is 100% natural and actually smells appealing rather than overpowering like the other vapours on the market which are designed for adult use. Considering that the vapour is 100%, yes I would say that the dummy and vapour offer value for money. Also the vapour is to be used sparingly so will last a long, long time. The design of the dummy could be improved by testing different end shapes as Chloe took a while to adapt to that difference. Also, the dummy is not the most appealing or attractive to look at when Chloe was using it, but not sure how they could improve on its overall appearance whilst still allowing it to work as it does. I was impressed by the product. It is not something I would have bought before but obviously now I know how useful it is, I definitely would. Without a doubt I would recommended this product to family and friends. An innovative product that helped clear my daughter’s nose and helped her sleep easy. Louise McCann – Chloe & Millie– 1 & 3 Years

Product looked good, well packaged and couldn’t wait to try it as my toddler always has colds. Good packaging, see through plastic so you can see what you’re getting and also hard for little fingers to open. Instructions were very easy to follow. It was very easy to get the room vapour in the dummy. Just a small pull of the dummy chamber and it opens to allow the vapour to be dropped in. Maybe this is too easy as my toddler could open it. Unfortunately the dummy is orthodontic shaped which for my toddler didn’t work as he likes cherry dummies so the dummy was a waste for us. If the dummy was cherry shaped and my toddler took to, I believe it would have helped him breathe more easily as you could smell the vapour through the dummy chamber, however as he didn’t like the dummy, it didn’t help him. My toddler didn’t sleep with the dummy at all. My toddler did sleep better with the room vapour in a bowl of hot water and also a few drops added to muslin tied to his cot. The quality is good but feel the dummy could be better and made harder to get the room vapour into so little fingers struggle to open it. I think the value for money is good; the vapour works better than any other I’ve tried and lasts longer. Different dummyshapes would be great and the dummy chamber needs to be improved. I would buy the room vapour again; the dummy however isn’t for us so wouldn’t buy that again. I would recommend it to friends and family as it does work well and babies who take orthodontic dummies would get on great with it. Great packaging and easy instructions, the vapour smelled great, worked well and lasted, just a shame the dummy wasn’t cherry shaped. Jacqueline Hall – Max 19 Months

My initial impression was that there seemed to be more packaging than was needed. I think that the room vapour would be better in a little box, instead of the plastic packaging it came in. Very clear instructions that shows you exactly how to use the product. Very easy to operate and easy to put vapour in .My baby was not particularly happy to suck on this dummy – however this is no reflection on the quality of the dummy and more to do with the fact that Ben has never been keen on dummies. The vapour in the dummy wasn’t particularly effective due to Ben’s reluctance to take the dummy. However, the room vapour in a bowl was more effective and created a pleasant smell. Ben did not take to the dummy but that is no fault on design, he just doesn’t like them. Ben is a rather settled sleeper anyway so we did not notice if it was helping him sleep better. There were no negative effects apparent. Nothing to fault in the quality of the product. Very baby friendly. Great value for money. Think they could save money by cutting back on the packaging. The room vapour could be packaged in a little box instead of the plastic packaging. I would purchase the room vapour but not the dummy, so I am pleased that you can buy the products separately. I would recommend this product to a friend if their baby was a dummy user but otherwise I would not consider it. Great quality product and very useful for some just not for me. The room vapour is great but very potent, so care is needed as too many drops could create an overpowering smell. Kim Smith – Ben 16 Months

Without a doubt I would recommended this product to family and friends. An innovative product that helped clear my daughter’s nose and helped her sleep easy.