Saved In Toys 5 Years Plus and Educational Toys 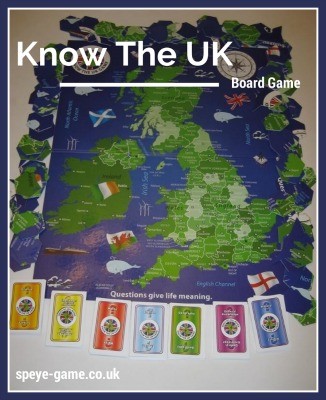 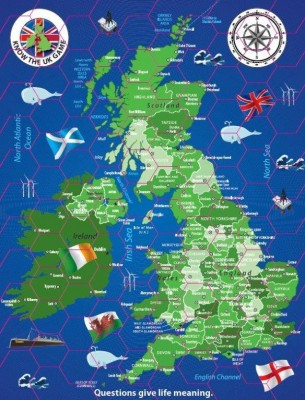 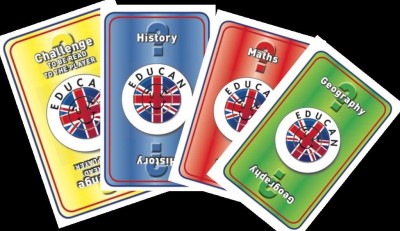 Welcome to Know the UK Game, this is a brand new, fun and educational game made in the United Kingdom (UK) about the United Kingdom.A fun 3 in 1 game for children, friends and the family to play.Children and adults can improve their UK geography knowledge by assembling the hexagonal pieces to complete the jigsaw. OR Answer the knowledge question cards on: Maths, English, Science, UK Geography, UK History.To add fun the challenge cards test each player’s cognitive skills, memory, language and speech abilities. OR The two can be played together as a board game by answering knowledge and challenge card questions correctly, then placing the hexagonal jigsaw pieces on the board to complete the map of the UK . The player has to say the name shown on the jigsaw piece as it is placed on the board.The knowledge and challenge cards can be used in the classroom, at home or on that long journey.Each box contains:1 UK map boardHexagonal UK jigsaw piecesKnowledge cardsChallenge cardsKnow the UK Junior Game boxes contain 2 levels of question cards for ages 7 to 11 years (approx)

Looks
like an Educational game to support knowledge and awareness of the world in a
geographical sense. At first glance, it looks like a game well suited to
schools/educational establishments. Clearly labelled, colourful and eye
catching package, Good sized box for storage. Tidy presentation. I think this
game is perfect for adults. I did have to read the instructions 2-3 times to
ensure I could teach my son. He did understand the concept of the game,
however, as an almost 7 year old; he needed a lot of aspects of the game
explaining. He mostly enjoyed the jigsaw component and I felt he gained more
enjoyment, knowledge and understanding from this. He has developed an interest
in mapping English towns he knows of so far, this enthusiasm will hopefully
continue and broaden his geographical awareness. I wasn’t convinced that he would be able to
pick the game up and get on with it without adult supervision. As the game comes in two parts (one part being
the jigsaw), I think the age is appropriate – and it is advertised as a family
game so hopefully parents would buy this for that purpose. As it is an
educational game, my son was able to tolerate around 20 minutes before he found
it challenging and similar to school work. Short regular bursts were welcomed. As
a social and educational development tool, this game promoted my sons awareness
of the world and enabled him to take an interest in a subject he may not yet be
exposed to at school. It has certainly encouraged him to explore the world we
live in. The jigsaw part he loved the
game he found challenging. Since being
introduced to this game he does now point to countries on the map/globe at
school as I am told. Good quality, durable and should last through many family
play sessions. Average price for a family board game. I really liked the option
to use the jigsaw as an introductory method to the game. I would consider
purchasing this to support educational purposes. I would recommend this game to schools. Educational game to support knowledge and
awareness of the world in a geographical sense. Sinead Cowham – Charlie 7 Years

This
looked an interesting game. The
packaging was bright, colourful and eye catching. The concept of the game is
good but had to read the instructions a few times and some aspects of the game
I was unsure about. Once we had gone through how to play this a few times Kian
did grasp the idea of this game. This is a good educational game and age
suitability was ideal. This game did
keep my son interested and certainly stimulated his knowledge about geography
and the world. This game has many aspects
but primarily it is really a good quality educational game. My son did find
some parts confusing and this is not a game he could play on his own or with
friends, at his age need to play with adults.
The quality is good and bit pricey for a game. I did find this game bit fiddly and confusing
at times and feel the instructions could be improved. The concept of this game is good but it is
hard to understand and has far too many pieces.Michelle Hartley – Kian 7 years

Looks good
packaging is nice and bright. Packaging
was good, eye catching and informative.
The concept of the game is very educational. Unfortunately my child did not really
understand the concept of this game. She
doesn’t seem to know what to do with the game it’s not something she can play independently
with her friends. She got very bored it didn’t hold her attention
probably as she didn’t know how to play it.
I think when she is older it would help with her development but feel
this is too advanced for her at this stage.
The quality is good. The price is on a par with other similar
games. Looks like a nice game but
unfortunately my daughter had no interest said it was too difficult. Rachael McCormick– Hollie 8 Years

I would consider purchasing this to support educational purposes. I would recommend this game to schools. Educational game to support knowledge and awareness of the world in a geographical sense.