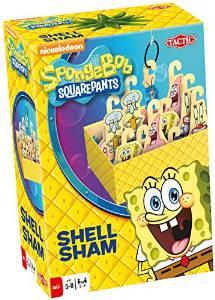 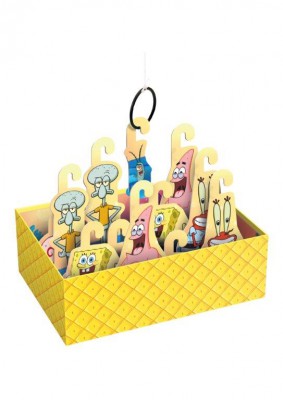 The
packaging was bright, colourful and very appealing to a child. Keen to try it out. This is so easy to play. Instructions very straightforward and fun
game for all the family. Very easy to
understand the concept of the game for children and adults. We all had so much fun playing this game like
hooking the ducks at the fairground.
Lola was laughing all the time and helped with hand eye
co-ordination. We were all very
competitive and enjoyed by Lola, friends and even Gramps and Granny joined in
the fun. Also a real hit with Lola as
massive fan of SponegeBob. This
certainly helped with concentration skills, taking turns and hand eye
co-ordination. We played this a lot as a
family and great fun had by all. The
quality is reasonable and we did have to keep putting the fishing rod together
as would not hold up to continual usage.
This might be improved as a good concept and a fun game. I feel the price is high due to the fact it
is a SpongeBob game and quality could be a bit better. I would purchase as a gift and have
recommended to family and friends with SpongeBob mad children. A great game to keep children entertained as
well as all the family and ideal for SpongeBob Fans. Julia Shears – Lola 6 Years

My
initial impression of this product based on the packaging, the name and the
recommended age (5+) was that I wondered if this game was going to be too
complex for my 4 year old son. I like the packaging as it is small and compact,
almost like a travel game. I don’t think the photo really demonstrates quite
how simple and straightforward this product is. The game is extremely easy for
an adult to understand. I had no difficulty in quickly reading through the
instructions and explaining it to my children. The concept of the game is
extremely straightforward. My two year old was able to understand and play this
game without difficulty. I would say 3+ would be a more suitable age guide. My
children were already familiar with the concept of fishing from playing
magnetic fishing games. My children understood the scoring of the game also. I
think this game is ideal for under 5’s because it is so quick to play. Several
games could be played in half an hour. It held my children’s attention as it is
such a hands-on, interactive game that doesn’t give them chance to get
bored. I think the game is a great introduction to turn-taking as the
child doesn’t have to wait very long for his turn. Also great for fine motor
skill development, problem-solving and attention. It is also good for
introducing simple addition through the scoring process. The game does not
assist with word development very much as the characters aren’t labelled.
Unless the children regularly watch SpongeBob, it is unlikely they will know
the names. Apart from SpongeBob, I had no idea who the characters are so couldn’t
tell my children. When we played this game, we played 2 or games at a time so
it must have sustained their attention. My children enjoyed putting the
game together and the quality of the characters was fine. I did have an issue
with the fishing rod though. I found it fiddly to put together and it had to be
reassembled during the game. For the cost of the game I would expect a better
quality rod, preferably already assembled. I feel that this game offers
value for money in terms of keeping a child entertained but it is let down in
the quality of the materials. I do feel it is over-priced for what is. I did
not like the fishing rod and I did not like the fact that the characters are
not identified. I would consider buying this product if it retailed at a lower
price. I would hope to pay under £10 for a game like this which is comprised of
very simple and inexpensive materials.I would happily purchase this
game if it was less expensive, very straightforward and a great game for
pre-schoolers – a must for young SpongeBob fans. Elaine Kalo – Harry and Annie –
4 Years & 3 years

Great
packaging box really draws your attention, great colours and of course features
SpongeBob. We were all looking forward
to trying it out. The concept of the
game is easy enough to grasp for children and adults. All my children grasped this game really
quickly and they all had fun playing together and certainly held their
attention. I would say this helps with
patience, concentration and hand eye co-ordination skills as bit of an art to
hook the character with the rod. They
all loved it and could hear them having fun and laughing. The quality of this game is good but took a
bit of a bashing from my 4 and the rod did fall apart a bit. The game is good quality, could be little bit
sturdier as such an interactive game but reasonable value for money. This is just a fun game for children. I would purchase as my children love the
SpongeBob character so a winner in our house.
I would recommend for SpongeBob fans.
Could be a bit sturdier, and a little bit cheaper but overall a fun
interactive game which kept my clan amused.Heidi Chandler – Lucy, Albert, Tilley & Simon – 5 year Twins, 7
& 8 years

I would purchase as a gift and have recommended to family and friends with SpongeBob mad children. A great game to keep children entertained as well as all the family and ideal for SpongeBob Fans.