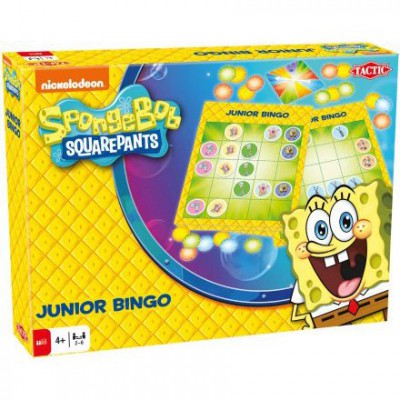 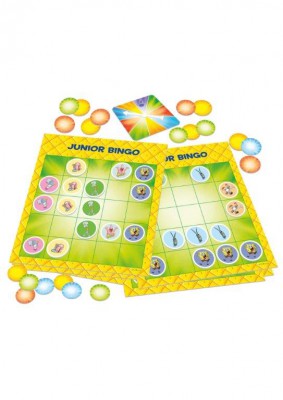 Great
packaging. Colourful with SpongeBob on
the front and very appealing to children.
Would catch my eye in a store.
Bingo have not played that for years and we were looking forward to
having some fun. The instructions were
clear enough and once explained to Nick he understood what to do with the
game. We really had fun with this simple
but entertaining game and as Gramps and Gran are Bingo addicts they were soon
round our house joining in the fun and explaining the wonders of Bingo to Nick!
It kept my son entertained but we all played as a family so was a great laugh and
we have even taken this away with us on a few weekend breaks. Certainly a good game to home in on
concentration skills. The quality is
fairly good but could be a bit sturdier.
I would buy this as a gift as great family game for all of us to join in
and kept Nick amused. Price could be a
bit lower but for SpongeBob fans is a good buy.
Room for a bit of improvement but ideal for any SpongeBob fans.  Julia Shears – Nick 4 Years

My
initial impression of the product was positive – I liked the idea of a simple
bingo game which is appealing to children. The packaging is appropriate.
Appealing to children. Standard board game size. My children enjoyed popping
the tokens out the card and setting the game up.I misread the
instructions the first time I played this. I didn’t realise everyone had to
take a token on each spin! I suppose in the chaos of playing the game with
young children I didn’t have the time and attention I needed to fully read the
instructions. I didn’t think it was clear in terms of where the tokens could be
moved to. My children didn’t really understand the concept of this game. They
are too young to have the patience for this type of game. I feel the game
takes too long to sustain a young child’s interest. They were interested in
looking at the characters but the concept of the game was lost on them. This
game is good for fine motor skills and colour recognition. For older children
it is good for problem-solving, attention, visual skills and social
interaction. The game is too complex for a pre-schooler. The addition of
pictures already on the board and the option of moving a token was confusing
for them. The tokens and board are fine. However, the spinner is of very poor
quality. The card it is on is uneven so you have to hold it flat with one hand
and spin it with the other. The white plastic arrow is CONSTANTLY coming off.
Really difficult and frustrating for small children to handle. And adults! I’m
amazed at how expensive this game is for what it is. Must be way out of
proportion with the manufacturing costs. Inexpensive and ineffective materials
and inappropriate for the lower end of the recommended age group. The spinner,
the pictures already printed on the board and the option of moving a token. I
would have preferred primary colours on the back of the tokens – better for
colour learning and more stimulating for children. We had no idea of the
character names apart from SpongeBob. I found this game too complicated
for pre-school children, very expensive and ineffective materials, and much
room for improvement! Elaine Kalo – Harry and Annie – 4 Years & 3 years

Arrived
Packaging bright and colourful and children wanted to play. Bingo have not seen a bingo game for a while
so would be interesting to see what they made of the game. The instructions are easy enough to
follow. My clan had this set up and
ready to roll in no time. This is a game
of listening and concentration. It was
their first introduction to the concept of bingo game and they seemed to enjoy
themselves. I would not say it sparks
the imagination just a game of chance and the fun aspect is the well know
characters. The quality is OK. Could do with a little improvement just to
make it stronger as children can be heavy handed. I actually think this is very expensive for a
bingo game. I know you pay more for this
being a SpongeBob game but did not have anything more than other games to
really hold their attention all the time so too expensive for what it is. A good fun game which my children did enjoy
but price far too high for what it actually is.Heidi Chandler – Lucy, Albert,
Tilley & Simon – 5 year Twins, 7 & 8 years

I would buy this as a gift as great family game for all of us to join in and kept Nick amused.