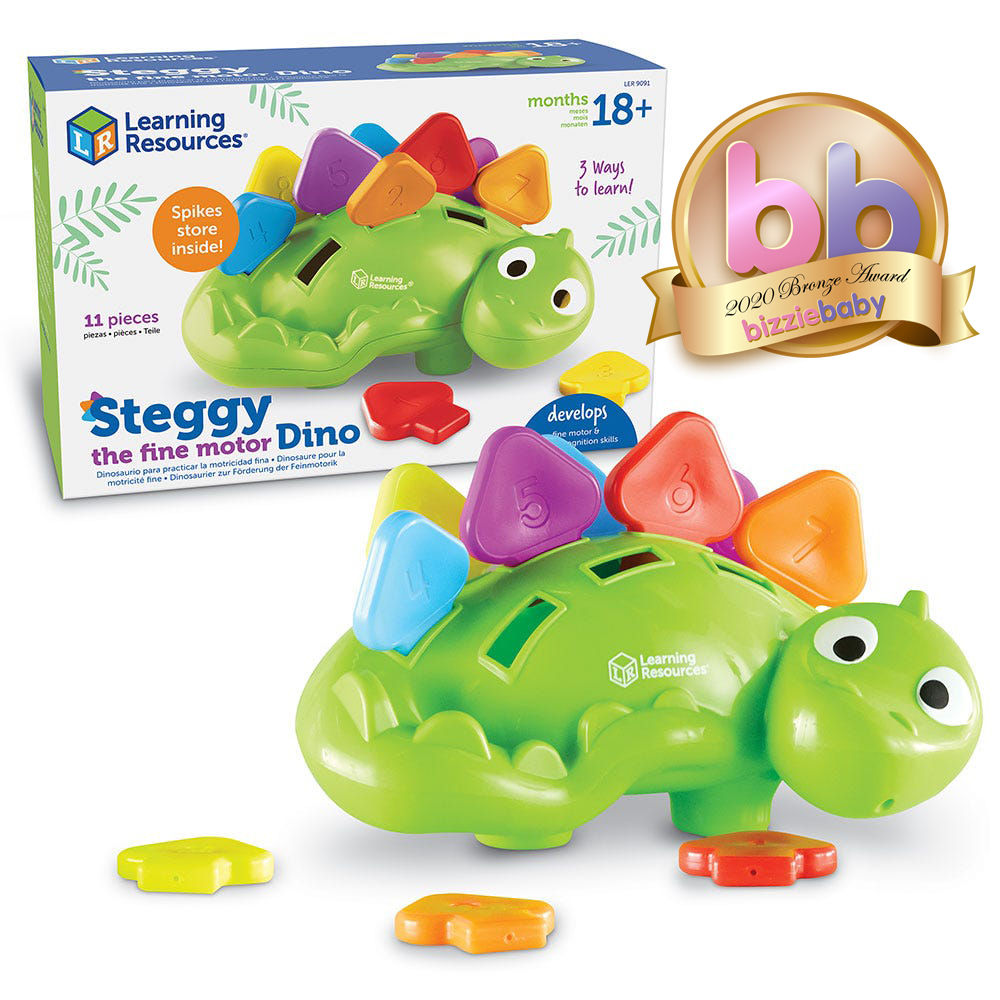 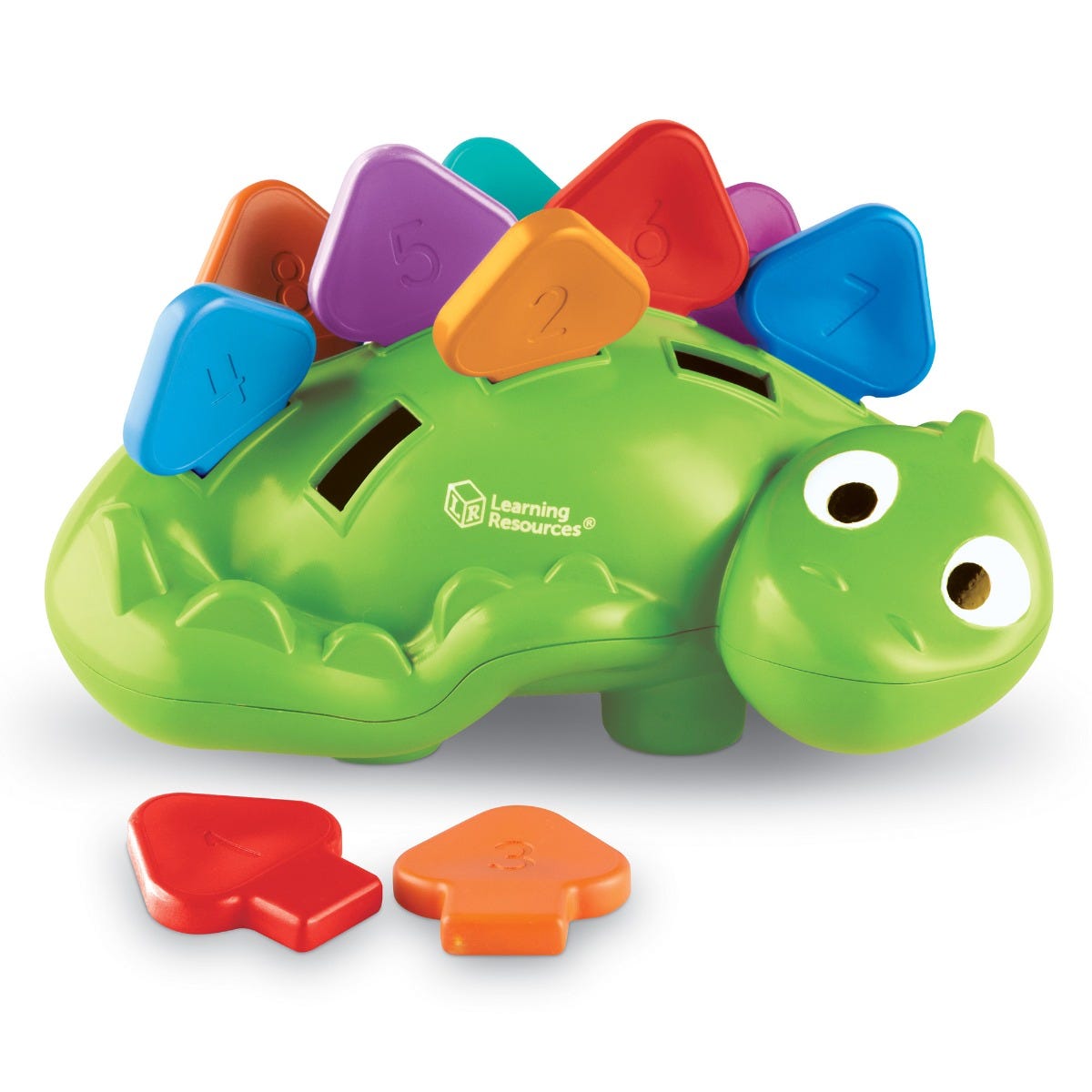 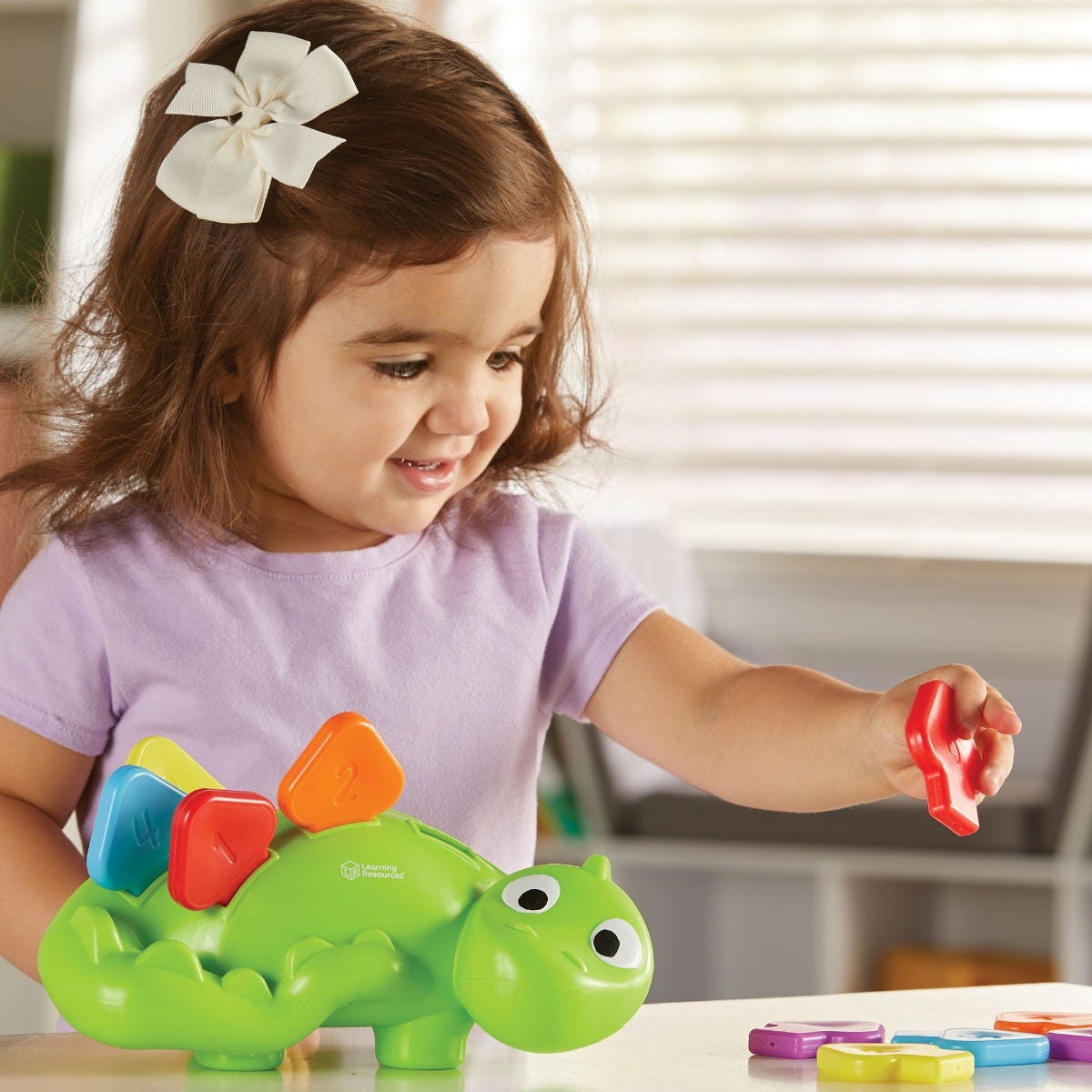 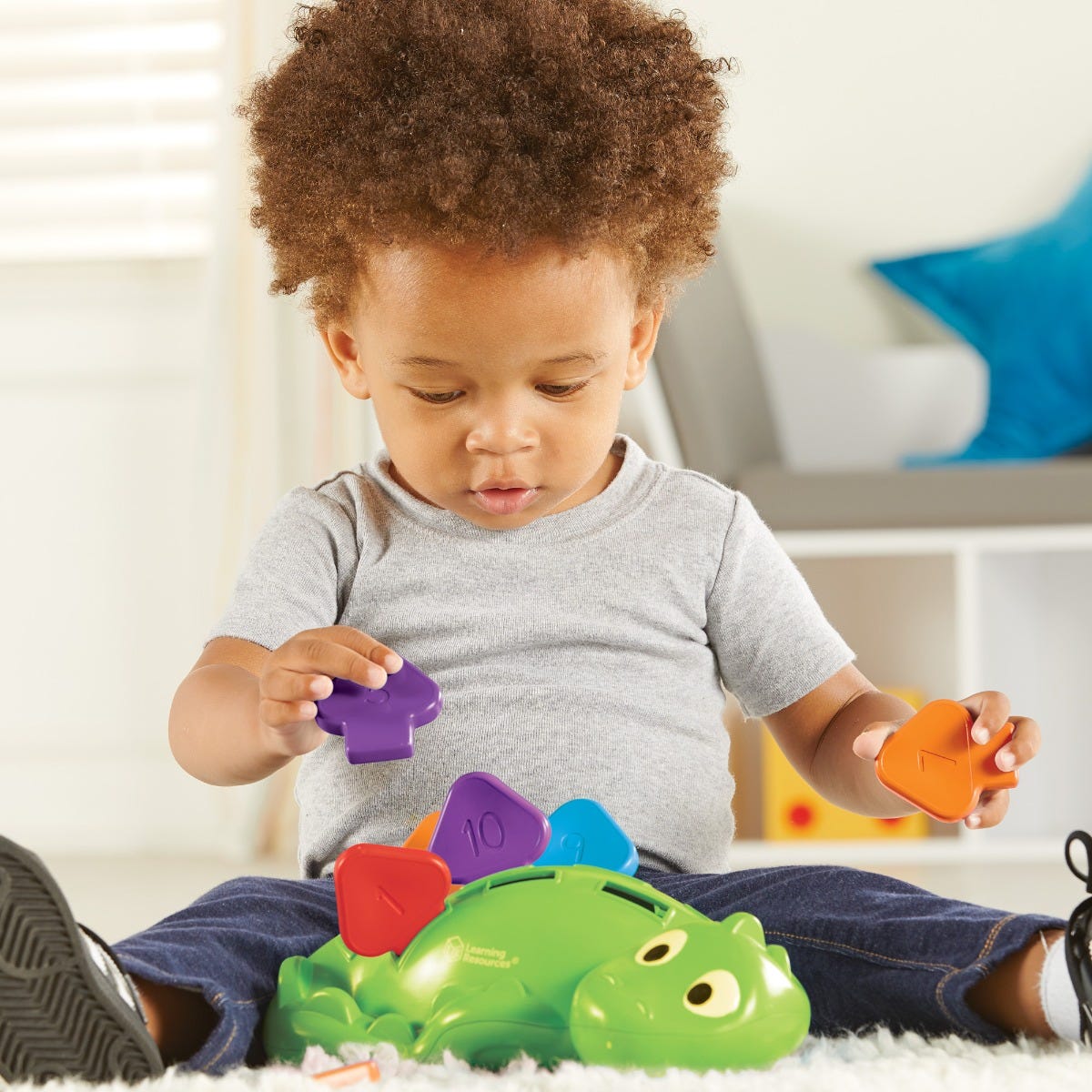 Looked really fun and compact, product has nice colours. I think it’s a good concept, little one enjoyed getting the scales out of the dinosaurs body and lining them up in his back, it was good to see her twisting the shape to remove them and slot them into the holes in the back. I liked the simple design of the product and thought that the idea of being able to store the pieces inside when not in use was good, only issue we had was the little door to get the pieces in and out was quite stiff to open. The instructions were clear and simple. My little one struggled sometimes to get the last piece out and struggled a little with the door but started to get the hang of it after a while. My little one was starting to learn her colours using the dinosaur, but she’s still a little young yet. She certainly knows which colour is her favourite. We counted the scales and looked at the numbers on them, we lined them up on the floor and counted them in and out, she can’t talk yet, but likes to listen to her big sister count them. Little one showed how she was able to move the pieces round to get them out of the dinosaur, she also had to learn how to pull the flap down. She also learnt to put the scales on the dinosaur and remove them before putting them back inside. This certainly helped strengthen pincer grip and improve hand-eye coordination. the pieces are small but not too small so encouraged a good grip so the piece could be moved into place. I liked the fact that the pieces were easily stored inside the dinosaur and we made it a game to make sure all the pieces were put back in. She played with the toy most days, as soon as she sees it she takes it out and we sit and play for a while, she’s happy to play with someone and on her own. This certainly kept her entertained as she loves playing with this and it is a toy she keeps going back to. it is both fun and educational as she enjoys learning through play and doesn’t get as frustrated when it’s a game. I liked the colours and compactness of the toy, and it was good that all the pieces fitted back inside. She loves taking the pieces out and slotting them in the top. Overall I thought the product is well made and finished well, the only issue we had was the flap on the back can get stuck a little bit. I think that the price of the product is about right. I would consider buying this product, my little one really enjoyed playing with it and it makes a change to have a toy that doesn’t make a noise. I would recommend this product as my little one has enjoyed playing and its multi-functional, learning colours, numbers and hand movements. Product was good fun and well made, simple but engaging. My little one loves playing with Steggy and is her go to toy at the moment, I will look for other toys from the range to compliment Steggy. Bethan Lloyd – Poppy 2 Years

I initially thought it might be too young for my little boy, it was nicely packaged and nice bright colours. Good for children to practice number recognition. Loved the design as nice bright colours, easy to slot pieces in and out. I liked the ideas it gave for different ways of learning using Steggy. My son did find this easy to use.  He understood the concept well. He was excited to see numbers on the pieces as he knows and recognises them. It helped him to revise his colours as he already knew them but it was nice to revisit them. He also knew his numbers but great to refresh his knowledge. I felt this toy was really useful for fine motor skills. I would agree this does help refine pincer grip and improve hand-eye coordination. I think this was helpful for my son and the sense of achievement was good for him. The body design of this was my favourite aspect! Keep things neat and tidy! Initially he was very attached to Steggy over the period of around 4-5 days but unfortunately Steggy lost his appeal to colouring and stickers. Though he liked that it had a name he could say, he likes dinosaurs and knows the name Stegosaurus but forgets it sometimes, he didn’t forget Steggy’s name. This did keep him entertained for a while. This is a good educational toy as there are lots of options with it, cute design too. I really liked the ability to store the pieces in its back and that it isn’t too bulky. He liked the name and being able to recognise the numbers on the pieces. Nice quality, the plastic was thinner and lighter than I expected after opening the box, but this isn’t necessarily a bad thing. Maybe for a child a bit younger it would be good value. I am sure if we had this when he was younger would have used it more. I wouldn’t consider buying it for my son as I felt it was a bit ‘young’ for him, he’s quite ahead for his age and even though he liked it like a pet. I feel it doesn’t stand out as a really exciting toy that I would talk about, it’s very nice though and might make a nice gift for a younger child, I just don’t think it had the ‘wow’ factor. Liked the design like that it can be used for different things – numbers, colours, fine motor skills. Got my little boy’s attention straight away, he loved the name Steggy, liked saying it and was easy for him to remember. I think giving it a cute name like this is positive because he associated it with having a personality and being a friendly figure. Lucy Kibbler – Leo 2 Years 3 Months

it looked really bright and nice. It’s a good concept. the toy is nice and tactile my daughter enjoyed putting the numbers in the dinosaur. the instructions are nice and clear. my daughter found it easy to do after I initially helped her. this toy did help my daughter learn her colours better. this toy did help my daughter learn numbers we also used to make sums and add numbers together and subtract. this toy did help with motor skills . She liked putting the numbers in the dinosaur. This does help strengthen and improve pincer grip and hand-eye coordination. My daughter liked doing this even if it was a little tricky to begin with. The body design is really good and great that  the pieces store inside the toy until next play .it’s harder to lose bits this way which I think is excellent in design and thought. my daughter has played with this toy most days since being sent to review as she really likes it. this toy does keep my daughter entertained .she likes saying the colours and numbers. This is a good interactive and educational toy. I like the design. Dinosaurs are appealing to most children. my daughter loved the fact it was a Dino. she liked putting the dinosaurs spikes in place and she liked his face etc. I think the toy is really good quality and it looks like it will last quite a while. I do think the toy is good value for money as it is  educational , fun and well made. I would consider buying this as my daughter loves it. I would and have recommended this toy to friends and family. my friends little boy seems to love it and plays with my daughters when he visits. This is a fun toy, well made, educational and I think most kids will love it.  My daughter and myself have really enjoyed testing this toy . She loves making sums and swapping the shapes around and colours . She also loved it being a dinosaur. It would be great if a larger version was made or other dinos to choose from also. Jennifer Derry – Charlotte 3 Years

I think that the price of the product is about right. I would consider buying this product, my little one really enjoyed playing with it and it makes a change to have a toy that doesn’t make a noise. I would recommend this product as my little one has enjoyed playing and its multi-functional, learning colours, numbers and hand movements. Product was good fun and well made, simple but engaging. My little one loves playing with Steggy and is her go to toy at the moment, I will look for other toys from the range to compliment Steggy.