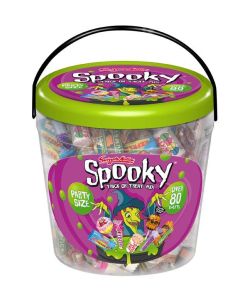 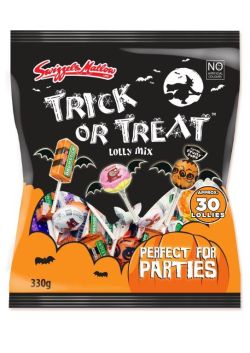 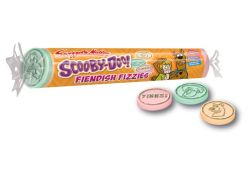 British confectionery giant and king of the trick or treat season, Swizzels Matlow Ltd, is gearing up for the Halloween season with a range of ghoulish party delights.This year’s terrifying treats include special treat bags and tubs of Swizzels Matlow’s perennial favourites, including Love Hearts, Drumsticks, Fizzers, New Refreshers and Fruity Pops. There are also big bags and tubs of treats for party goers or families to share, including Trick or Treat Lolly Mix, Monster Treats and Spooky Treat or Trick Mix.

The tubs and packets all look quite bright and fun. There’s a good selection of sweets especially in the Spooky Trick or Treat Tub.  The girls especially enjoyed all the hard sweets.  I didn’t give Laila the chewy sweets or lollies as these were a bit beyond her teeth, but Yasmin had a good go at them all.  The packaging is spooky and Halloween themed but in a cartoony way. Some of the sweets had Halloween style orange and purple wrappings, but most were in their usual wrappers. Good classic sweeties. Good quality and the kids love them. Good value as they all get eaten (if not bythe kids then by me!).  The taste was fine – just like I remembered from when Iwas a child. I would buy them as the children enjoyed them and they’re great to have in the cupboard in case you have any visitors (not sure how long they’ stay in the cupboard though!).  Would  happily recommend as they are nice sweets that everyone knows. We enjoyed these sweets as a family.  Us grown ups enjoyed the drumsticks as they were a bit beyond the girl’s teeth and concentration span, but that was good for us! Sophie Callan – Yasmin and Laila – 4 & 2 years

The tubs and packets all look quite bright and fun. They offered a good selection of sweets in every pack. Josh enjoyed all the sweets, and would quite happily have eaten them all in one go until they were gone.  Luckily, the chewy ones are quite hard work, so he did have to give in! The packaging is Halloween themed and inviting for the children who think the sweets are probably different to what they’ve had before. The sweets in the tubs and bags are old favourites, some of which have got new Halloween wrappers.  There were also some Scooby Doo gums (which were his least favourite) and Scooby Doo branded Loveheart style sweets.  I liked these! They are good kid’s sweets.  No chocolate and not too messy!  Apart from a few sticky lolly sticks. Luckily Josh is old enough now not to leave them everywhere! I think they’re good value as there is a large selection of different sweets so everyone will like something and you won’t be left with the usual suspects knocking around the bottom of the tub for ages. The taste is fine as most of the sweets are tried and trusted favourites. I would buy them as there’s a big selection and they last quite a while .I would recommend especially if you are giving to Trick or Treaters and each individual sweet or mini pack seems more substantial than just one sweet from a tin of Celebrations for example.  We all like these sweets.  The only thing that would really stop me buying them is the fact that I enjoyed them a little too much! Sheila Reynolds – Josh – 8 Years

I am so happy.  All these sweets are my favourites from childhood, such as ParmaViolets, Double Lollies and Refreshers. TheSpooky Trick or Treat Mix has over 80 sweets in a tub.  These comprise of  Double Lollies, Parma Violets, Refreshers, Fizzers, Drumstick Lollies, FruityLollipops, Boiled Sweets, Climpies.  A good selection.  The Trick or Treat Lolly mix has Fruity Pops, Double Lollies and Drumsticks.  Something for everyone. My children enjoyed them immensely –especially the lollies as I don’t buy them as a rule.  They liked the little packs of Fizzers and Climpies.  They weren’t entirely sure what to make of the Parma Violets. The drumstick lollies and Refreshers were a little bit too chewy for them and got stuck round their teeth, which I then had to help them unstick!  But what they didn’t want, my other half and I were happy to finish. All the packaging was bright and spooky looking. With green and orange a lot in evidence.  The lollies all had special Halloween wrappers instead of their usual wrappers.  We also had some Double Dip which has been rebranded Spooky Dip for Halloween.  This also was quite spooky looking which the children thought was funny. The sweets in the Trick or Treat selections were all traditional sweets in either their original wrappings or special Halloween wrappings, however the Double Dip was rebranded Spooky Dip and had three flavours – orange, Mixed Fruit (green) and red with a blackcurrant swizzle stick that made your mouth go black.  I also received some Scooby Doo Gruesome Gums which were shaped like skulls, bones etc., these were actually quite unpleasant and tasted of bubble mix.  There were also some Lovehearts that had been rebranded as Scooby Doo Fiendish Fizzies and had Scooby Doo pics on instead. I think they are good quality sweets. They may not be particularly sophisticated, but they are great kid’s sweets (which invariably means that adults like them too!).  Although at first glance the SpookyTrick orTreat Mix (£4) and Trick or Treat Lolly Mix (£3) may initially seem a little pricey for the size of pack, once you realise that these are not quick one mouthful sweets they do seem like better value.  There are lots of chews and packs of little sweets so they last a lot longer.  The selection of sweets makes them good value too as there is something for everyone. On the whole, the taste of the sweets was as you would expect, and shouldn’t be changed in any way as these are classic, childhood favourite sweets.  However the Scooby Doo Gruesome Gums weren’t nice at all. I’m not a great lover of Halloween and don’t buy packs of sweets for Trick or Treaters, as I don’t think Trick or Treatingis a good thing, however I would be more than happy to have these sweets indoors for my children (and myself!). Would recommend as they are better value than a lot of the tinned sweets, even when they are on half price offers, as you get more sweet for your money. I like all these products however the Scooby Doo Gruesome Gums really let me down as they were really quite unpleasant and not many at all in the packet. Gillian Robinson – Harrison & Rosie 4 & 6 Years

Would happily recommend as they are nice sweets that everyone knows. We enjoyed these sweets as a family.