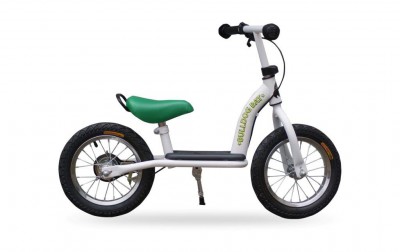 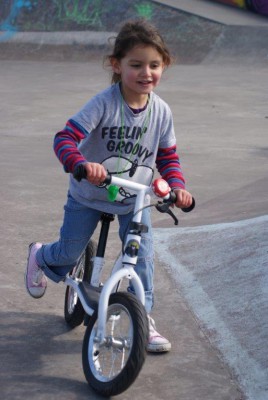 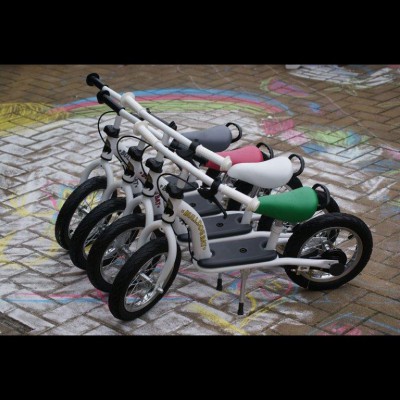 The Bulldog bat balance bike sports a footrest for going downhill or on the flat, it has a quality rear wheel drum brake, a metal stand, steel wheels, pneumatic tyres and a robust frame which means it will look good even when handed down to neighbours or siblings. Adjustable seats and handlebars, different colour seats available for customisation. The quality is a given with our 3-year warranty the only decision is design and size. Balance bikes are the ideal way of providing strong, early biking confidence. The 12 inch black Bulldog bat bike with a khaki seat is ideal for boys and girls from about 2 1/2 years to age 5. Durable Steel 12" wheels, suitable for 3-5 year olds – Adjustable handlebars (48-63 cm height) – Adjustable seat (36-48 cm height) – Length 85 cm – Weight 5,8 kg – Drum brake – Pneumatic tyres – Footrest – Metal stand – Carry handle on seat – 3 year warranty

Very
nice, sturdy looking bike. Arrived in a box much larger than needed, the box
had some holes torn in it but I think they were due to miss handling by courier.
My partner was able to set up the bike very quickly and easily. The quality
seems to be very good; I have not encountered any problems at this time. There may be cheaper bikes available but this
is a very sturdy bike with good quality tyres and seat that will last longer
than cheaper versions. My son really enjoys riding to nursery on his bike, and
the other children enjoy taking turns too. I have recommended this bike to a
friend as well as the website from which it came. Very good quality comes in a
variety of frame and seat colours and fun for children. Very good product lets
my little boy feel like a big boy on his 2 wheel bike! Elizabeth Cooper – Owen 3 years

The
product was very well made and sturdy and attractive to look at. Well packaged
in large box to avoid any damage to the product. Very easy to follow step by
step instruction leaflet. The product is excellent quality very well made and
sturdy. A little expensive for a Childs bike, I would not expect to pay more
than £50 for it. It is perfect for a child like mine
who can’t yet ride a bike with peddles, it gets them used to having to balance
whilst sitting on the bicycle seat and I think it will make it easier for him
when he does learn to ride a peddle bike. Although expensive my child loves it
and will get a lot of use from it. I have recommended it to a few
friends with young children. Overall it is a fantastic product, my son found it very
easy to use and loved that it looks like a ‘big boy’ bike; he has played with
it almost every day since receiving. Amy Murphy – Ryan 4 Years

The
Bike was ready built which I thought was a great idea as when we have bought a
bike before we had to assemble it ourselves. Once we pulled it out the box my
first impression was it looked very sturdy and strong but quite heavy. When we
raised the handle bars there where a lot of scratches around the front pole. The
packaging was the right size for the bike but could maybe do with a bit more
protection inside. I did like that the bike was preassembled. The only
instructions needed were how to raise the handle bars and seat which was
included but I was unsure as to whether I needed to move the brake around or
not as it seemed to be at a strange angle.
The bike is very sturdy and stable, looks well-built and is comfortable
for my son. The only problems I found with it were the scratches on the handle
bar pole when I raised it which I think was where it had previously been
tightened to and the brake is too hard for my son to use, he cannot pull it
tight enough. It is a good bike but I believe there to be other balance bikes out
that are cheaper and maybe look a bit nicer. I think it is more expensive than
it should be and too heavy for my son to move about easily. The footrest does
not really serve much purpose as my son automatically puts his legs up behind
him rather than in front. The bike is more expensive than most other balance
bikes and is quite heavy for children. I
was quite pleased with the balance bike at first and my son loved the design.
It was easy to ride and looked comfy but it soon became apparent that the foot
rest is not needed as my son put his feet up behind him, finding it hard to
keep balance when his feet were in front. The brake is too hard for my son to
squeeze and as it was not on the instructions I am unsure as to whether it
needed adjusting. The bike is also too heavy to carry about if your child gets
bored or too tired to carry on riding. Overall I am happy with the bike but I
would not consider buying it if I saw it alongside other balance bikes. Katie
Roberts – Logan 4 Years

Very good quality comes in a variety of frame and seat colours and fun for children. Very good product lets my little boy feel like a big boy on his 2 wheel bike!