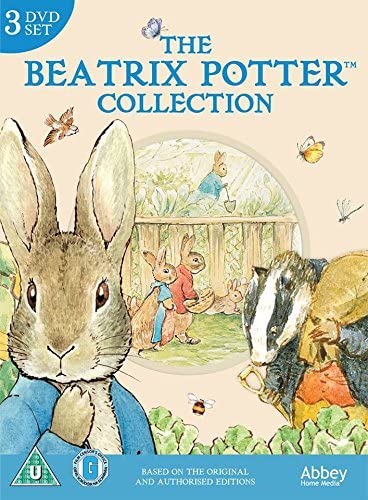 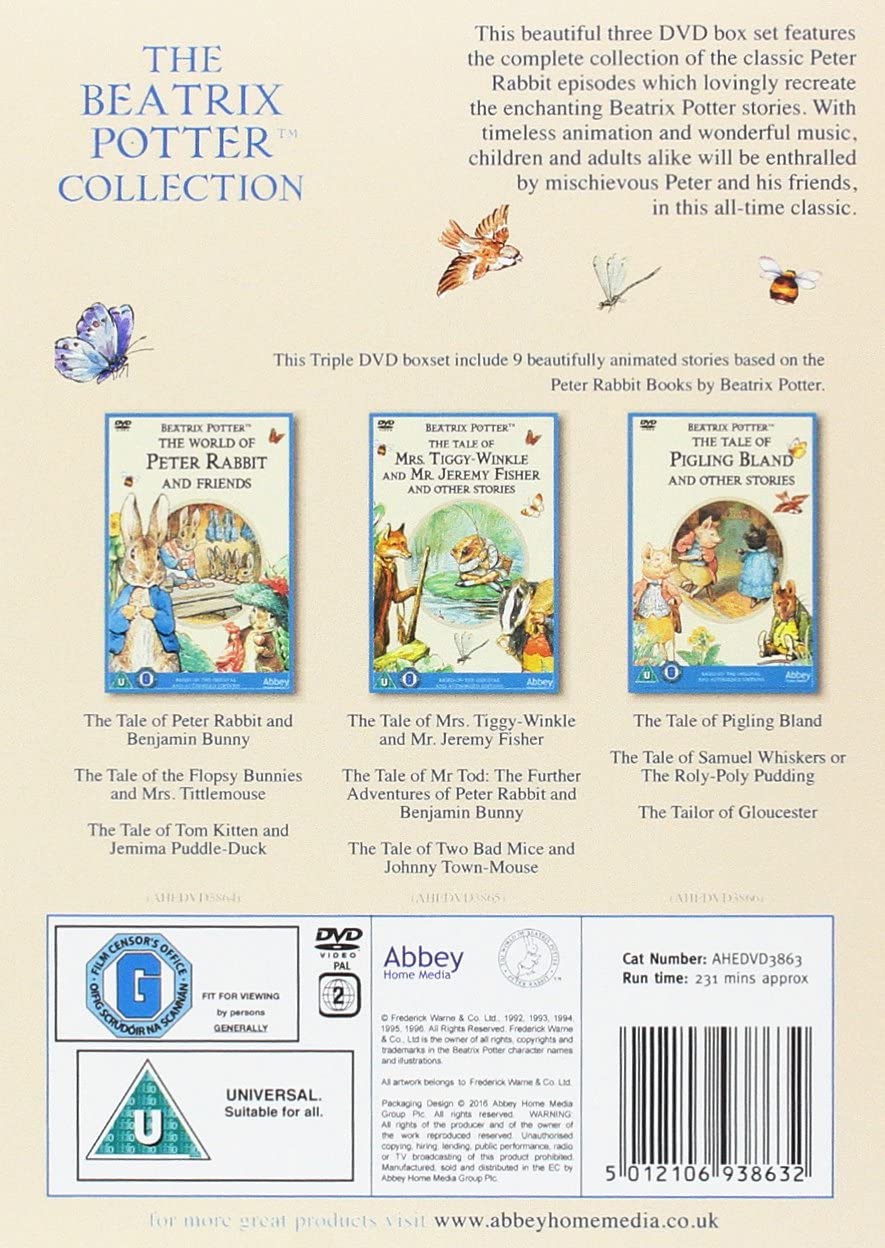 A gorgeous new DVD collection of classic Beatrix Potter tales. The Beatrix Potter Collection is a beautifully presented 3 DVD box set
Features the well-loved characters that have entertained generations of young readers the world over.

Looks beautiful and old fashioned. The packaging is beautiful and so different than the really bright primary colours that are used on children’s DVD’s nowadays. It is old fashioned looking and was not necessarily the DVD of choice by Olive when looking at which to watch. The content was lovely, just as I remembered the stories. We were able to snuggle up on the sofa and listen as the beautiful
narration engulfed us. Once Olive started to watch the DVD, she was immediately engaged. She loves animals and enjoyed the stories very much. I didn’t feel there was any educational benefit gained from watching the DVD’s. The quality was very good, no issues whatsoever. I thought the pictures may look “old” but this was not the case and compared well to more modern character DVD’s. 3 DVD’s for less than £10, which have been watched on numerous occasions already represents great value for money. I am so used to selecting the latest TV/Film character DVD’s I would not have considered Beatrix Potter beforehand. Seeing Olive engage with characters I knew from my childhood was lovely and I will look to buy further DVD’s in the series and accompanying books. I would absolutely recommend the DVD’s to others and already have. Beautiful, innocence in a DVD with no accompanying gaudy merchandise brainwashing our children. Karen Byrne – Olive 3 Years

Very reminiscent of the books and had plenty of episodes on the DVDs. The details in the drawings were very in keeping with Beatrix potter illustrations. It also seemed to be aimed at slightly younger aged children I feel. Overall the DVDs were pleasant to watch very much reminding me of the books I had and read as a child. I feel this would be better aimed at the under 5s as my two though they watched it were not won over by it. The quality was in keeping of all DVDs, high. I feel for someone with younger children and wanting to enhance a Childs love of the books then good value. I would possibly purchase this as a gift for younger child. I would recommend as it is a lovely thing to watch. It made a pleasant change to watch something of this nature. Sophia Cauley – Poppy & Florence – 8 & 5 Years

Sceptical at first, as I used to love Peter Rabbit but haven’t watched this version in years so not sure if my son and I would enjoy it. I
like that the packaging is pretty compact for 3 DVDs, not big and bulky like most. Easy to open and I had no trouble getting the DVDs out. The illustration on the box sums up the films, as it shows a few of the main characters. Although the artwork makes it stand out as an old version which some people tend to avoid as they like the newer versions. I’ve always been a fan of Peter Rabbit, and re watching this version after so many years made me feel pretty nostalgic! I really enjoyed the DVDs, each episode is a good length, and you have a bit over an hour to each DVD which is a decent “film” time. I do feel however, that they are a bit outdated so it’s harder for the younger
generation to relate to as they are used to the newer more advanced animation and storylines. As my child is still fairly young, he has a
short attention span so after 15 minutes of one episode he wasn’t interested anymore. However he seemed to enjoy what he did watch and tried making the sounds of the animals (which was tricky for me to think of sounds to use for a couple of them!). From the storylines within the DVD I would say no not educational, but learning new animals from throughout the films I would say yes. It is clear to see that the DVDs are a good few years old due to the quality of the animation which can give a split audience as a lot of people prefer the new types of animation with better quality. I think the quality is okay but it isn’t the best. I’d say yes good value because you get 3 DVDs all with a decent run time to keep little viewers (and big viewers) entertained and will be good to watch on a rainy day with the family! I personally wouldn’t buy this product because my son doesn’t seem to be interested in it so would be a waste of money for me. I wouldn’t suggest this to friends and family because it’s not something I feel they would be willing to watch or be interested in. However if someone wanted to specifically want something relating to Beatrix Potter or Peter Rabbit then I would happily suggest this product. I feel it’s a great product if it’s something you’re in to, and it’s great for families with children and adult viewers which is good as it doesn’t limit the audience. There are plenty of different story lines and each episode is full of action. However I feel it is outdated, especially as there is a newer version of this animation that has been made, which this generation would now prefer over the older versions. My overall experience was that it made me feel nostalgic, all 3 DVDs have a good length to them and I loved watching it more than my son! Phoebe Marie Coleman – Cadden 22 Months

I would absolutely recommend the DVD’s to others and already have. Beautiful, innocence in a DVD with no accompanying gaudy merchandise brainwashing our children.