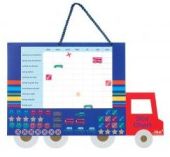 Cars is our new complete …blue2 range and we do love it. …blue2 boys still need gentle encouragement and this rewards chart does the trick.

The chart looked great and it had an attractive design. The content is well laid out and it’s very clear and there are enough ideas for the age group too. The boys were exited each time a star was put on. With perseverance the chart really does encourage good behavior. Using the chart was very successful but it needs to be used constantly for a positive effect. The quality is great but it needs to be in reach of tiny hands. It’s probably a little on the expensive side, especially if little hands were to damage it. The size of the chart is definitely suitable and appropriate for my twins. Overall, the design is great and the chart is very good at helping little ones to behave and get rewards. Pauline Frazer – Dean & Daniel 3 Years

The chart seemed sturdy; it had nice colours and stood out. I also liked that there were a lot of stickers to put onto the chart. I liked the format of the chart but I would have preferred for there to have been space for me to write my own targets because some of them were not appropriate for my son. It’s very straightforward and easy to use. It was a little difficult to establish which stickers were better,, a smiley face, tick or a star. Using the chart started off well and I found that changing the sticker throughout the day encouraged Ben to try harder but the novelty soon wore off. The chart also started to bend a little after Ben started to change his own stickers. I think it is good value for money at its current price but I would not pay any more than this. Overall, it’s a fun way to set your child targets and reward them when they reach it with fun stickers. Mark Flanagan – Benjamin 5 Years

I was first surprised that the product was just made of cardboard as I expected it to be made from something much more durable. I didn’t find the chart versatile either as you can’t change the categories and some of them were not that appropriate. I would have liked to have personalized my chart as some items weren’t relevant (e.g. homework) and others I don’t feel should be used as a reward (e.g. eating my dinner) – for me, "tidying my toys" would be more relevant, so the option of writing in other categories or replacing existing ones would have been good. There weren’t really any instructions with it, but it is a very simple and straightforward product to use. Fully understood the concept of the chart, but was confused by what the different stickers meant e.g. was a car sticker better than a bus, a cross worse than a sad face etc. I ended up just saying whether it was a good or not so good sticker. It was successful for a while, but the lack of personalization and too many different types of stickers meant I gave up using it after about three weeks. My son found it a bit confusing as he did not get stickers for each category and as mentioned before, he wanted me to explain what each sticker meant and what type of reward it would mean for him. Not bad quality, but would prefer it to be more robust so it lasts longer. At first the stickers appeared to be really good quality, but after a while they didn’t stick that well. The overall size of the product was fine, but the actual chart was very small. Was excited by the idea of the product, but ultimately disappointed as it didn’t not live up to my expectations. Rachel Roberts – Ollie 4 Years

Overall, the design is great and the chart is very good at helping little ones to behave and get rewards