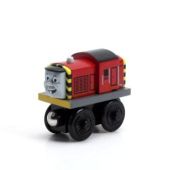 More new train collection accessories available for Early Engineers – the first stop in wooden train play. Two new individual trains, Salty and Thomas, have been added to the collection of train accessories available with Early Engineers, the new easy, creative train play concept from Learning Curve, specifically designed for aspiring young engineers aged 18 months and over. Salty –Salty is a dockside diesel with a rust red body and square grubby weather-beaten face.  He’s called Salty because he loves everything about the sea, and has worked at docks the world over.  This has left him with a wealth of stories, and he has a tale for every occasion, whether his audience wants to hear it or not.  Salty is good at his job – so good in fact that he’s the only engine, steam or diesel, that can handle trucks.  He works at the docks as a shunter, and can be included when Thomas picks up a special. Suitable from 18 months. Price for each train: £6.99 (small)/£9.99 (large).

Well packaged, looks good and sturdy. The size and style of the train falls in line with other trains in set. Great entertainment value, it was played with just as much as his other trains. No concerns as this train is well made and age appropriate. Keeps kids attention as it teaches them the difference between different one train and another in terms of names, colors and shape/design. Great for hand/eye development, because child has to maneuver train along tracks and through obstacles while role playing with other children. Not good value at RRP of £9.99. Because train does not have any extra moving parts and functions. It is part of the Thomas range that won’t lose popularity and will always be around from one generation of kids to the next. It fits in well with other trains in set and is well played with. Salty’s face is fun and the yellow and black chevron is eye catching. The steel shafts used for the wheels are made from decent diameter steel which prevents kids from buckling the wheels if pressed down too hard. Lisa Brider – Calvin 3 Years

Average product in a huge range, what is to be expected from these products, all to the same level quality. Small enough to be environmentally friendly but with enough information on the box and the smallest amount of plastic needed to see the train. Looked like Salty! But didn’t fit under the Brio and Brio like wooden bridges, so if you have this set which Thomas etc., all go under then be aware that Salty doesn’t! Ollie took a while to play with Salty. This was probably because we hadn’t read the book whereas he plays with the others in the range because they were the first Thomas stories he had. He plays with Salty but not as much as the other trains, but I still think he would like them all! It would be good if there was the option of having battery operated or not on more of the range, although it is important for children to have both! Perfect for my two year old. He’s been playing with these since younger than the age range advised! Considerable language development talking about trains and the work Salty does (helps if one is familiar with Salty’s stories!) Chunky toy for little fingers, aids fine motor skills through pushing him along, joining trains etc. It’s atheistically pleasing toy – exactly like Salty is in the books, so easily recognizable. Great for cognitive development as the child learns about the work of trains and develops his/her own stories. The whole range is good for children to share as it is large and with enough variety helps develop co-operative play. I think the whole range is slightly overpriced because it’s "Thomas”! Would recommend the range, would depend on what the child’s favorites were as to whether I would recommend it. Not a first train to buy in the range, but of the same quality as all the others. (This is a new product currently not listed on the leaflet that came with it!) Good solid piece of wood that fits the Brio/similar but be aware that it may not fit under the bridges. (Our Brio is Tesco Brio like and old so it could be that but unlikely). Helen Dewdney – Oliver 2 Years & 10 Months

Good, looks like a very cute and cheeky engine. The packaging is good too, item was well displayed so that you could view what the train looked like, and William was excited as soon as he saw it. It fitted perfectly with Williams’s wooden railway, and is just the right size for an almost three year old to hold, so was the perfect size. William loves attaching all the trains together. William played with this toy for a long time, but part of this may be because he already had the railway to play it on, not sure he would have played with it for so long otherwise. William had fun attaching the train to his other trains and the cabooses and driving them around the tracks, attaching the trains helps his hand eye co-ordination as the magnetic areas are small so they have to be lined up correctly. It is a very simple and basic toy that allows role playing. William does play with this toy without using the railway that it attaches too, as we have wooden flooring so he loves to push it the length of the room. Its great quality, William plays with this toy a lot, but you need to buy the wooden railway and the other trains, separately so that makes it more expensive. William loved playing with this train, he is a very cute, cheeky looking train, and William is a huge Thomas fan, so I expected him to love it as much as he did. Ginette Satherley – William 2 Years

It fits in well with other trains in set and is well played with. Salty’s face is fun and the yellow and black chevron is eye catching. The steel shafts used for the wheels are made from decent diameter steel which prevents kids from buckling the wheels if pressed down too hard.