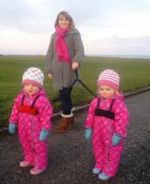 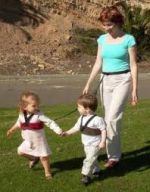 Twin Reins are specially designed safety harnesses for twins that give you peace of mind when out and about with your twin toddlers. Instead of buying two sets of walking reins, here is one Twin Set that covers all your needs! Re-designed by our experts and tested by parents of twins with safety, comfort and convenience in mind, these really are the ‘Rolls Royce’ of reins – only the best for you and your duo! WHAT’S IN THE TWIN PACK?Everything you need to get you and your twins out and about safely!2 x Child Harnesses (adjustable at chest and shoulders)2 x Parent Leads (adjustable with detachable handles)1 x Parent Waist Belt (adjustable with ring to clip on leads)HOW CAN THEY BE USED?They are so flexible you can use them as either:- Two completely separate, independent single reins – As a Twin set but joined together using a single parent lead handle- As a Twin set but using both parent handles – one in each hand- Single or Twin set, clipped to the parent belt (leaves you hands-free)HOW DO THEY WORK?Our premium quality Twin Reins Set has been designed to make them easy and convenient to use. Each child has a single-piece harness, which simply pops over their head and secures safely at both sides. The reins sit comfortably on the upper chest (as recommended by health advisors as the strongest and safest part of a young child’s body for a harness). For your children’s comfort, a new soft & flexible neoprene chest pad has been added in a choice of vibrant colours and the reins are fully adjustable at both sides and on the shoulders as twins come in all shapes and sizes!

Initial impression was that they are quite expensive for what they are, but impressed with the versatility of the product. You can use them in various different ways depending on your needs. There weren’t really any instructions included, but they weren’t difficult to work out. There was a print out from the Twins UK website. They are so simple to put on the girls. They just slip over their heads and then fasten under their arms. Much easier than trying to put their arms through. I wouldn’t be without the reins now. I walk my 3 ½ year old soon to pre-school every morning and I used to take the double pushchair which used to get in the way of everyone and everything. I wouldn’t have considered walking the three of them up there without any sort of reins as they tend to scatter in different directions. I did have two sets of conventional reins, but they were hard work as I didn’t have any hands free and they used to get tangled up. They love wearing them. As soon as I get the reins out they start getting excited and start shouting ‘Walk’. They have so much more freedom now as they never really used to go anywhere without being in their buggy. They are definitely easier than using two separate sets of reins as, although they may sometimes tie you in knots, you’re still only using one hand to hold them rather than both hands or holding two sets in one hand and getting even more tangled. The best bit is that you can also separate them as they come with a spare handle so you have the best of both worlds – for example if you have an extra pair of hands one day. The other benefit is that they also come with a waist strap, so that you could either attach the reins to your waist if you needed both hands free, or for when you are securing one twin into a car seat, the other twin is safe and can’t run into the road. The waist strap was too small for me as I am quite large, so could do with being a bit bigger, however it just gave me the idea to secure them to the belt loops on my jeans instead! I think they are of great quality webbing and the neoprene bib area is nice and soft – especially during the summer months when the girls only had strappy tops on, so they didn’t rub at all. The only thing I was slightly disappointed about was that on one of the reins, the ring that secures the bib part to the strap seems to have been sewn on the inside rather than the outside, but it hasn’t really affected the usage of the product. If I had paid for them I would probably have returned them for an exchange. Initially, I did think that they seemed quite expensive, however I am completely converted and can’t gush enough about them. I never thought a simple set of reins could make life soooo much easier. I would definitely buy the product. I may have thought they seemed expensive but now I’ve used them I wouldn’t hesitate. I’d definitely recommend these reins – and already have done. I have several friends with twins and a few mums at my son’s pre-school have twins and have told them all about them. Even though there is the slight issue with the ring being sewn onto the wrong side, the fact that I am so pleased with them more than outweighs this minor detail. I love, love, love these reins. My girls love wearing them, it makes my son feel really grown up that he’s allowed to run free and it just means that for the first time in nearly four years I can leave the house without a pushchair. I am so pleased with them. One of the best baby/child purchases you could make for twins. Julie Mundell – Rosie & Annie Aged 2 years 6 Months

Bright colour. Great idea. Packaging was compact and easy to identify. Instructions were precise and clear to follow. When putting the reins on the section which goes over the child’s head is quite small without having to extend the section. These reins did help me have more control when out walking with my twin girls. I had a split decision on liking these reins as one of my daughters liked wearing them and the other did not. These are definitely better design idea to use compared to having to use 2 individual reins. The quality is good as the material is very strong and works well. Great idea and really like the aspect that they can be hands free. Good value for money. I would purchase these and have already recommended. The reins needed to have padding around the shoulder straps as the material rubs on the child’s face and shoulders. It would be a good idea to have rings to clip the individual reins as having them clipped together sometimes meant that the children were walking in front of me and tripping each other up. Otherwise these are an excellent product. Melanie Smith – Isabella and Rosalind Aged 2 years

Looks really good and the reins were sturdy. I particularly liked the padded areas that go across the chest. Packaging is quite simple, didn’t really catch my eye. Instructions very clear, and easy to read. These are very easy to put on, however you do have to make sure they are fully untangled before you can put them on. Using these reins did give me slightly better control, but I still had to control which way they went, so I could not carry too many bags so that my hands were fairly free. My twins liked holding onto the straps over their shoulders. I found using the Twin reins was easier because the children were close together and had to go the same way, I also had one hand free. Quality is very good and the materials that have been used will last a long time. This product is far too expensive. These reins are designed for twins; most people with twins in this current climate are struggling financially and would not pay that much for this item. I would not spend that amount of money on this product. Maybe around £20-£22? I have met many families that have twins, and they have been very impressed by this product. Very good product, just a bit too pricey. Fun for my twins to wear and try out. A little bit of practise to have both children going the same way as each other, a very good and useful product for people with twins. Holly Deasy – Cerys & Abigail 18 Months

I love, love, love these reins. My girls love wearing them, it makes my son feel really grown up that he’s allowed to run free and it just means that for the first time in nearly four years I can leave the house without a pushchair. I am so pleased with them. One of the best baby/child purchases you could make for twins.