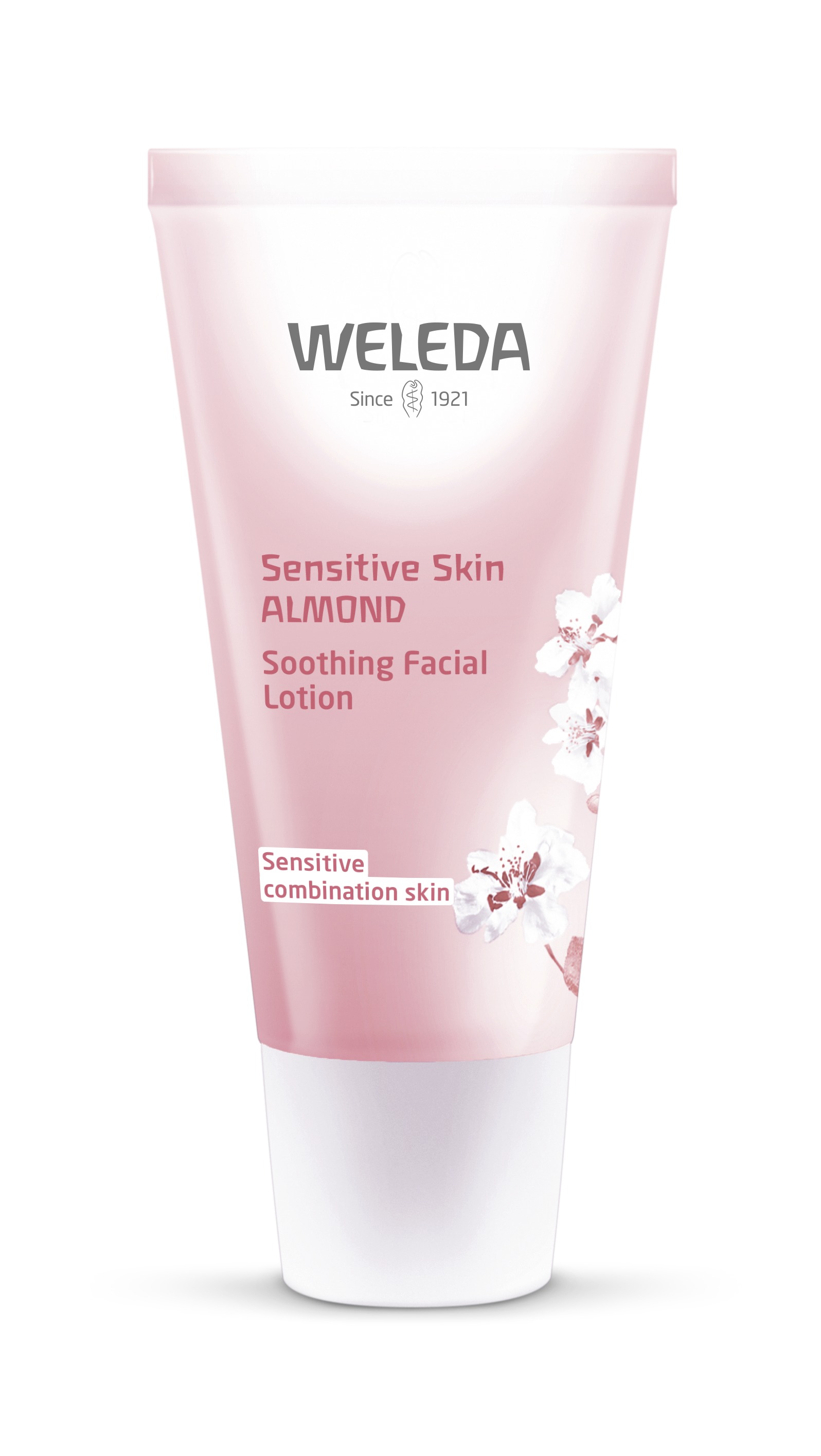 Weleda Almond Soothing Facial Lotion (formerly Almond Moisture Cream) is a mild, unperfumed, hydrating moisturiser made from the finest organic almond oil and plum kernel oil which make the skin soft and supple and improve its natural protection. Excellent for use below make up.

This looked nice.  I have heard of Weleda so was interested to see what it was like.  It moisturised my skin really well, but isn’t at all greasy.  It was very easy to apply.  The tube is metal so easy to get the lotion out, especially when near the end of the tube.  The lotion kept my skin nice and soft.  It soaked in immediately which was great as I could apply my make up straight away afterwards.  I liked the fact it was a metal tube, as although initially I thought it was quite clinical being metal rather than plastic, it was easier to get the lotion out and it was possible to get every last bit of lotion out which is often not possible with plastic tubes.  It is fairly expensive; however it lasted for a while and was a great product so worth the money.  I have already bought myself another tube.  I really do recommend it.  It’s made my skin very soft, and has calmed hormonal spots.  I used to get areas of dryness around my nose which I no longer have.  Since using the lotion 3 different people have told me how good my skin looks and that I’m glowing.  I love the fact that it sinks in after applying so that I can put my make up on straight after, so I’m not waiting around.  I am very pleased with the moisturiser and I will continue to use it in the future.  Definitely one of the best I have used. I also like the fact it’s more natural than some other moisturisers and the price isn’t too bad either. Jenny Lewis – Ellie 2 Years

I thought the product looked nice, the packaging was clear and I liked the tube it came in.  It had a good effect on moisturising mine and my husband’s skin,  I have slightly oily skin but he has pale sensitive skin and it worked well for both of us.  The crème was easy to apply as it came out of the tube nicely and was smooth to apply.  I found it a little thick but it kept skin soft all day with no problems for both of us.  I did find that the cream had to be rubbed in a little more than my usual cream and did take a while to soak in. I liked the tube it came in as it was easy to squeeze and get the right amount out and if needed you could suck a little back in due to the metal tube.  I think it is ok value for money, it is only a small tube and did not last very long, but would be fine for occasional use especially as it’s a little thicker, on wintery days it would be perfect.  I will continue to use the cream and my husband said the same,  he liked the scent and how easy it was to use.  I would recommend this to my friends and family, I do have family with sensitive skin. It is a great product and worked well on different skin types.  Abi Lyes – Zoe 23 Months

The nice pink colour of the tube and box makes it look very feminine, soft and gentle.  The lotion is absorbed great and does not leave skin oily or greasy.  It leaves skin soft and calmed.  I used three times a day rather than just two as I felt by the afternoon my skin was dry again.  It was very easy to apply as it is soft and absorbs well.  Some creams tend to be hard and greasy, often hard to get out the tube.  This was great to rub in.  It does not leave your skin looking white, oily or greasy.  At first I was only using it night and day like it says, but felt I needed a top up during the day.  I do have particularly dry skin though and felt it was very effective in helping with this.  Rubs and soaks into skin almost instantly and does not leave a residue.  I could dress/undress after applying it and it would not leave a mark on my clothes as it was absorbed easily into my hands.  The cap would have been better if it was a flip top cap or had some texture/grooves on it.  Even though I could open it no problem anybody with limited function in their hands would find the smooth plastic a bit tricky.  Other than that a great design which stands on its top, which means you are sure to get most if not all the cream out, without having to squeeze or roll the tube up.  It is a great product, worth the money. I would like to see it in a bigger size though as I enjoyed the product and would like it to last for a while.  I will continue to use this sample but as I currently get other creams on prescription for free and in bulk I probably will not buy it.  If I did not get cream on prescription, I certainly would.  I would definitely recommend it.  It is such a great cream for rubbing in and not leaving your skin feeling oily, sticky, greasy or heavy.  It leaves skin cool, soft and refreshed.  This is one of the best lotions which is both great for rubbing into the skin and leaving your skin feeling great.  Other creams may do one but not always both jobs.  This does both.  Kim Smith – Luke 2 Years and Ben 9 Weeks

Since using the lotion 3 different people have told me how good my skin looks and that I’m glowing. I love the fact that it sinks in after applying so that I can put my make up on straight after, so I’m not waiting around.