Wing It Board Game 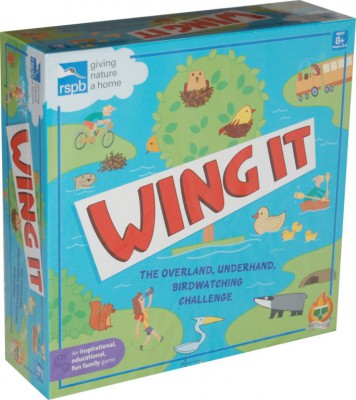 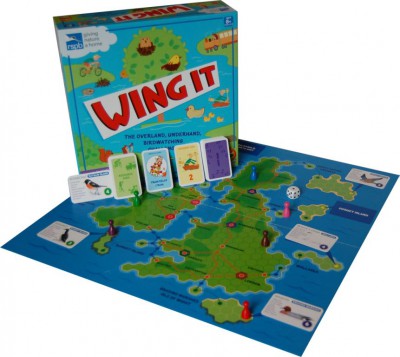 WHAT IS IT ABOUT?
Race around the British countryside to be the first to spot unusual birds and at the same time hamper your opponents (in a variety of evil ways)to prevent them from getting there first. A wonderfully cunning family game that combines education, double-dealing and fun.A surprisingly underhand game, produced in conjunction with the RSPB.All the bird cards are painted by the official RSPB artist and are a collectors item in themselves.WHERE DID THE IDEA COME FROM?
A couple of years ago at the Toy Fair, a fellow exhibitor and avid bird watcher disappeared for the day as there had been a rare bird spotted on the coast of Norfolk. On his return, he insisted we should create a game based on bird watching, because it is such a popular pastime.After a little research we discovered that the RSPB had over 1 million members. An untapped market, perhaps, so Stuart and I thought we’d give it a go.Early versions involved a rogue birdwatcher with a shotgun, but we thought this was a bit extreme. However, there is still plenty of mischievousness in the game to keep all those non birdwatchers thoroughly engrossed.

Wing It Board Game Reviews

Ruth Awarded The Pants on Fire Wing It 4.4/5

I initially was unsure the game would interest my child and
thought the game might be quite complicated to understand. The packaging gave
the impression the product was aimed at younger children than the age it is
recommended for. I had to read the instructions a few times to understand the
concept. My son understood what he had to do; he enjoyed the game. I had no
concerns with him playing with it. It is appropriate for his age but I noticed
Hexagons are described as ‘squares’. The game is good for learning map skills
and symbols. He has not found other ways to play with this game but there is
scope to. The quality is excellent; nice images and good information. I think
it offers fantastic value for money. I liked the way it introduces my child to
birds; unusual game in a positive way. The text on the bird cards is very clear
and well written. I would buy this game and tell family and friends about it. Despite
not initially looking very appealing, the game was enjoyable and factual, good
for learning. We will play it again. Ruth Hook – Jake 8 Years

Claire Awarded The Pants on Fire Wing It 5/5

This game looked fun and easy to play. It was well packed;
solid box that was easy to open. The concept of the game was very easy for
children and grownups to understand. Samuel understood the game too, which is
good. I had no worries with his playing this game. It was fun. Once finished he
wanted to play again. This game helps with their development and learning about
birds and the world. The quality is excellent; the game is very well made. It would
last a long time. It’s an excellent game for the money; lots of play with it
and it’ll last a long time. I would buy this game. I have already recommended
it to others. It is a fun game with learning involved, which is well made and
suitable for the whole family. Claire Woods – Samuel 9 Years

Hayley Awarded The Pants on Fire Wing It 4.5/5

This game looked very interesting. We love playing games
together so was looking forward to playing with this. The packaging was great;
the box was strong and kept everything together nicely. The concept is really
good; Jo really enjoyed playing it, as did his friends. They all understood the
game ok. The age group is just right for this game. It definitely kept their
attention; it’s a very fun game and teaches them about birds too. The quality
of the game is really good; it’s definitely worth the money. I am thinking of
buying another one for my nephew for Christmas. I have already recommended this
game to others and so has my son. It is a great game that has been enjoyed by
all that has played it. Hayley Wright – Jo 8 Years

The quality is excellent; nice images and good information. I think it offers fantastic value for money. I liked the way it introduces my child to birds; unusual game in a positive way. The text on the bird cards is very clear and well written. I would buy this game and tell family and friends about it.

Ruth Awarded The Pants on Fire Wing It 4.4/5

Wing It Board Game Stockist Information