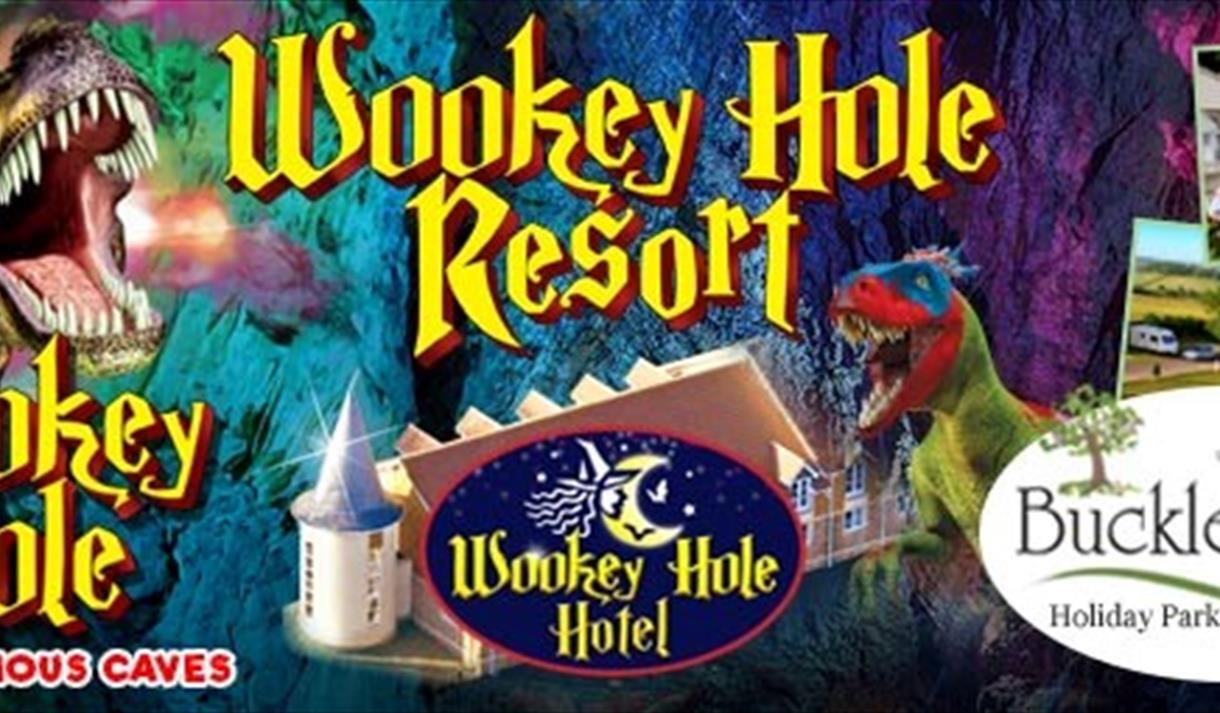 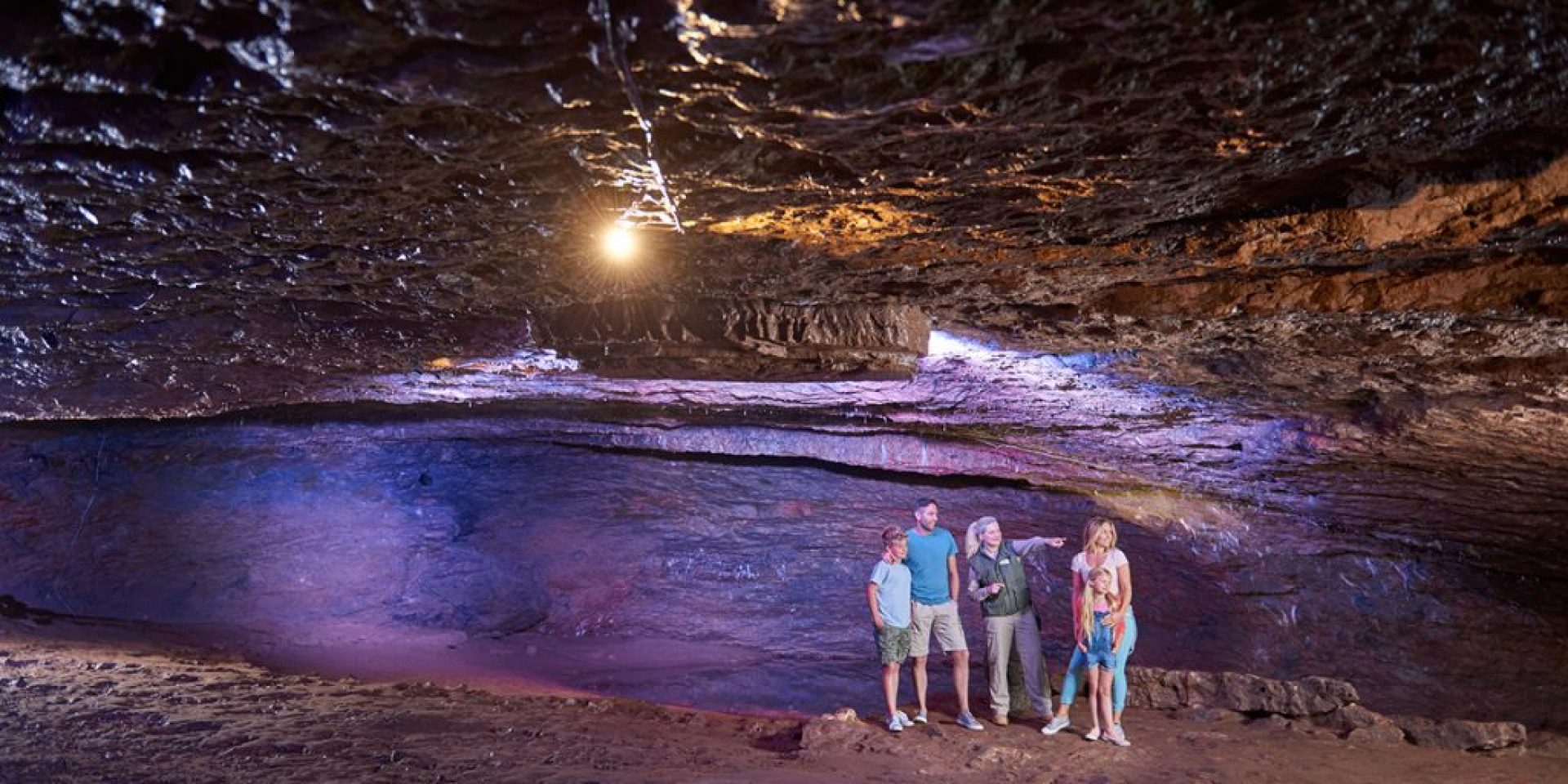 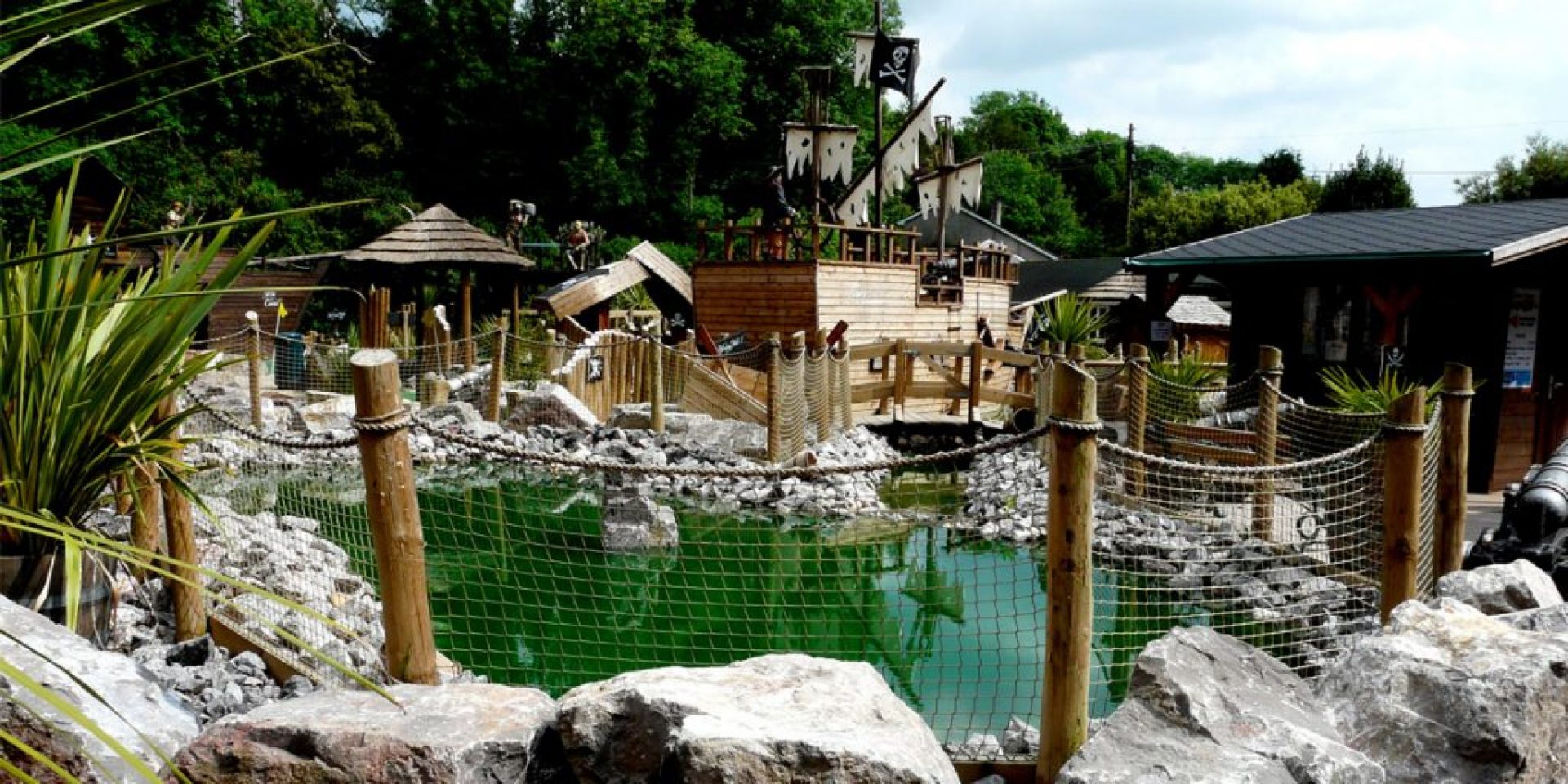 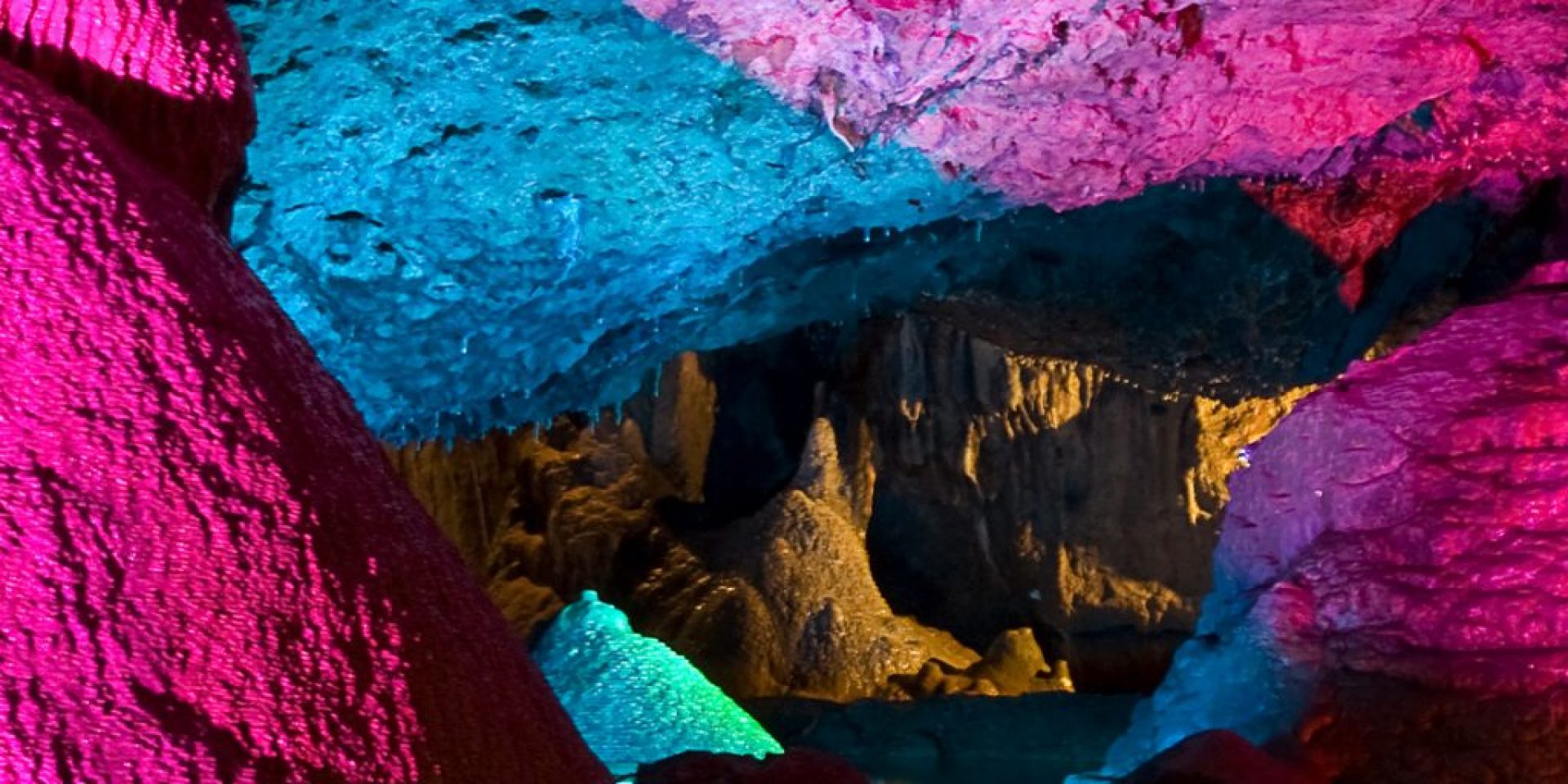 Revamped, restored and totally remarkable, the new Wookey Hole Experience is bursting onto the 2015 holiday scene in an explosive mix of HISTORY, MYSTERY & FUN. Wookey Hole, a wonderful & unique Somerset family attraction. Come for a great Somerset day out, or stay longer at The Wookey Hole Hotel.

World Famouse Wookey Hole Caves – Somerset, in the South of England, is a land of mysteries. Here at Wookey Hole, where a river flows out of the underworld, pagan and Christian legends intermingle. Explore Wookey Hole Caves and also check out the Fairy Garden, Extravagant Light Show, Prehistoric Ice Age Valley and lots more.  www.wookey.co.uk

By
the looks of the leaflet we received from Wookey Hole Caves we were very
impressed and very excited to go. We travelled by car taking us 3 hours, we
used a satnav and it took us direct to the door. It was well signposted and easy to spot. The
parking facilities were more than adequate, there was ample shared parking with
the hotel and then they had 2 extra fields to park in next to a very pretty
little river. We parked in the first
field and due to the damp weather conditions it was quite muddy underfoot. We
found the entrance to the park a little dated with 2 lanes to queue and a very
old fashioned kiosk at the end. The
queue did take about 20 minutes to get to the end yet didn’t seem very busy at
that point. Once we were through the gates we followed the long paths that lead
us directly to the caves. This was a
stunning sight and as you look over the edge you are able to see the fairy
garden and dinosaurs. The children
thought that was ‘amazing’ and looked forward to going into to caves. Unfortunately we felt that the queues for the
caves were far too long and could be improved if they informed visitors that
they can actually get further into the park without going into the caves
first. We felt that the standard of the
activities were very good. The tour
around the caves was fantastic and very interesting (even for young
children). As a family we really enjoyed
the 4D dinosaur cinema, our children found it very funny when the chairs
started to move and the water squirted out!
Another highlight to the day was the ‘School of Magic’ show, to say
these are amateur performers and some quite young; the act was polished and
professional. The children really enjoyed their day at the caves; they were
able to have a go at making paper and also enjoyed the soft play areas. As a
family this is definitely something we enjoy doing. It is an enjoyable fun day out yet
educational. As a family this is definitely something we enjoy doing. It is an enjoyable fun day out yet
educational. At no point throughout the day did we feel unsafe in the
park. Speaking as a mother the only
concern I had was that inside the caves were obviously very uneven and very
slippery so had to have a tight grip on the children! In comparison to other
parks we felt that this did offer value for money. We would go again but only if we were nearby
as we travelled from Mansfield to Somerset and back in 1 day which was a long
day. I would recommend this attraction. Lovely
park in lovely surroundings, the only reason I didn’t give a 5 was due to the
lengthy queue to get into the caves which I feel could be avoided. A very
enjoyable day out for the whole family with something for everyone. We even felt that the weather couldn’t spoil
the day as it just added extra atmosphere and there is also plenty to do
inside. Karen Stringer – Maisie &
Jack – 5 & 3 years

We
had been to the Wookey Hole before and the children were very excited to see
what was new and have another visit.
They were both very excited. Very
easy for us to locate as local to this attraction. Well signposted and good car parking
facilities. We waited in the queue for a
little while but not too long. Imagine
it would be longer in the summer months.
Polly & Charlie loved the caves and found it fascinating. They loved the witches’ parlour, the magical
Mirror Maze, the Circus and the gold.
They also enjoyed the fairy garden and the dinosaurs. The soft play
areas were also a hit. The catering
facilities were good and we had a chance to rest and grab a coffee while they
were both enjoying the soft play areas.
We would highlight the toilets are not close by the caves so best to
make sure they pay a visit before queuing up for the caves. We could have spent
a lot longer here and will look at booking into the Wookey Hotel for our next
visit. We do like to plan special trips
out as a family during the year and this will be on the agenda for a summer
visit. Overall good value, full of fun
things for all the family to enjoy. The
catering facilities are good, but would suggest having more toilet facilities
available. A fun packed day for the
family and our children were talking about their experience all the way
home. Would certainly recommend. A great fun, interactive, educational tourist
place to visit which our children just loved.Giles Eves – Polly & Charlie 6 & 4 years

Looking
online at all the different attractions very excited, oldest son loves books
about under the ground so he was especially looking forward to going through
the caves. Using the postcode on the brochure the attraction was found with
little problems, we drove. Parking was fairly average, someone was standing
directing cars in and showing where to park but not really needed as lots of
spaces to choose from! May have been different later in the day as we arrived
close to opening time. No problems, very little queue and person on desk friendly
and polite, gave us an information sheet of attractions on that day and the
times. Did at times find inside the attraction very cramped. Not very pushchair
friendly and very few staff around to direct if needed. Was difficult at first
to get between things with lack of signs and other signs pointing to doors
which were found to be locked! Our party did get split up at one point and took
a fairly long time to finally meet up again due to poor signage. Saying that
lots to look at in the different areas and at a quieter time may have been more
enjoyable as could have stopped to look, on the day we went however lots of
people and not very easy to stop when moving around without feeling we were in
the way. Lots of different activities laid on, dinosaur land very much enjoyed
by both boys and we also took them both to the circus. Took our eldest into the
cinema which he liked but at times the sound was too loud and distorted the
dialog which was a bit of a shame but think it bothered me more than him! We
decided to try the mini golf before going home as the way the attraction is
laid out kind of leads you there at the end. Unfortunately because of this most
of the people in the park must have had the same idea making it way too crowded?
Stood in line for 30mins and having still not even got to the first hole and
due to needing toilet and nappy change we had to leave. Overall
yes I do think they enjoyed their day. From adult point of view did seem a
little disorganised with lack of direction however children don’t always seem
to notice things in the same way. Have since told their friends they have been
and it was fab so that’s good. We do like to plan family days out at different
attractions where our boys get to experience different things. No real
complaints regarding food and drink, fairly standard in comparison to other
similar attractions. Toilets dotted around site, again not well signposted and
did struggle at one point with no one to ask where they were! No toilets by
caves which you are told about at ticket office and warned to go before going
up there which we did. Son did say after walking up hill and standing in line
for 15 mins he needed the loo but by this point to walk back downhill again
would have put us right back to end of the line. Not too much of a problem as
he was able to hold until we make it through the caves, not sure that a younger
child would have been able to. Kept children close when walking through as at
times would have been easy to loose in the crowds when things like the circus
was turning out. I think looking online beforehand and reading through the
brochure made the attraction sound a lot better than it was. Found ourselves
waiting around in different ques for different things meant we didn’t get a
chance to do all the park offered as ran out of time! I would properly not
visit again. Maybe a family with younger children who could visit during term
time would be fine but too crowded during the time we were there. Boys enjoyed
their day out and have been telling friends the fun they had but no I don’t
think I would overly recommend the park. Really looking forward to our day out
but did find overcrowding, lots of queuing, lack of staff around and poor
signage a bit disappointing. Best bit of the visit was the dinosaur land but I
think this was because we weren’t tripping over people and could let boys run
freely without worrying about losing them in the crowds. As a family we do like
days out and try to avoid amusement parks as find these a bit overwhelming.
Wookey hole caves sounded like a fantastic day, lots to see and do with a
slight educational aspect with the caves and history of the place but overall
we were left feeling a bit deflated but with some fab pics of the dinosaurs! Naomi
Brown – Lucas & Oliver – 5 Years & 18 months

I would recommend this attraction. Lovely park in lovely surroundings, the only reason I didn’t give a 5 was due to the lengthy queue to get into the caves which I feel could be avoided. A very enjoyable day out for the whole family with something for everyone. We even felt that the weather couldn’t spoil the day as it just added extra atmosphere and there is also plenty to do inside.