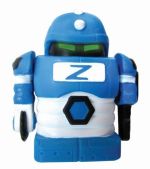 Zibits Mini Robots – Mega Fun! Each robot is remote-controlled, has great light and sound effects, is highly manoeuvrable, can spin 360 degrees and there are 12 funky styles to collect. With many different accessories and playsets to collect, you can connect them all together to build your own Zibit world.

I was intrigued with the little robot yet Callum was very excited. I had never seen or heard of them before so really didn’t know what to expect. I liked the packaging, it was simple and you could see exactly what was included. It wasn’t excessive and product could be easily removed. The size was appropriate, little boys seem to love small collectables and as for style there are a lot of different ones to collect. The entertainment value was brilliant, Callum loved it from the start; we even ended up buying other sets for him to compliment the robot he had. Other sets available such as football stadium and lab as well as additional track. All sets and track fit together and a whole world of robots unfold. Recommended age is 6+ however Callum was just 5 when we received robot.  However I checked it over and as Callum is quite technically minded anyway so we handed it over to him and we have never looked back he loves zibits now and still plays with the sets and robots he has. The robot on its own would soon loose appeal I think, however accompanied and expanded with the other accessories and the play value is endless as is the use of imagination. With cranes and zip lines etc the fun is endless. The robot is quite tricky to manoeuvre at first with only forward movement and spin it does take some practise to master so hand-eye co-ordination and the need for patience is stimulated. There are plenty of role-play opportunities within the lab. It’s simple enough to play without a doubt, however 1 small robot on its own would soon get forgotten about, with each new accessory though interest is quickly revived. This product is of good quality, after months of play little Dex is still going strong and the extra sets are strong and durable. It most definitely offers value for money, the robots are under£10 and the additional sets are between £10 and £25. After testing this we have been and purchased more…apart from Dex, we already have 4 additional Zibits living with us as well as 2 additional sets too. I would definitely recommend this to others. Good quality and brilliant value for money. Callum has played alone, with family and also with friends and has always had nothing but fun with this product. Jaime Willans- Callum 5Years &Ashley 15 Months

Courtney was very excited when she was opening this parcel when it arrived. She couldn’t wait to open it up once she saw what was inside, a very funky looking robot. It came well packaged. It is small but it would be as it’s a Mini. As soon as Courtney started to play with it, she loved it.  It’s an ideal size for you to put in your pocket too and take it out. Both my daughter and my 5 year old son loved it. I actually filmed them chuckling away playing with it. Cameron especially liked to make it crash into things. The recommended age is 6, maybe 5 + would be better as Cameron also loved it and I felt ok with him playing with it too. I was surprised at how long they played with it for. They both kept making it chase the accessories it came with and spin all over the place. They used the dining table as it went whizzing around on there. They both made a little scene on the dining table then they would take it in turns moving the robot with the remote control trying to miss all of the obstacles they had put in place. It’s a small but nifty toy which kept them both entertained for some time. The remote control is also very easy to use. They even wanted to take it on holiday with us. Cameron makes it push his Disney cars along and makes them fall off the dining table which he finds amusing. I think the quality of this toy is really good. Courtney has had no problems working the remote control, neither did Cameron. It does offer valuefor money as they keep picking it up to play with so it’s not something that only lasts a bit then it’s forgotten about. I would consider buying it. I have looked at others to buy them after seeing them with this one. I have already recommended this to family and friends. We have just been away to South Wales with friends and Courtney insisted we take it for them to play with in the caravan. Now my friend is looking into buying them for her son. Overall it’sa great product. It’s a fun, compact and funky robot that has kept both Courtney and Cameron entertained. They asked fo rit to come on holiday with us so must have made an impression on them. Kerry Baldwin – Courtney 7 Years

We had not heard of these robots before so was very interested as to what they were like. The packaging was clear with all the relative information. The size and style of this robot was great. It was great for Harrison to play with and easy to carry around too. He took it out and about a few times as was ideal to fit into his pocket and kept him entertained for a while. I had no concerns at all about him playing with this toy robot. I was quite surprised at how long he played with it for. He went into role play when playing with it too and I could hear him chatting away whilst playing. It’s a great toy too to help with a child’s development skills as they have to use hand-eye co-ordination and in my son’s case role play. It’s very easy and fun to play with which is good too. The quality of the robot is fantasticand offers great value for money. I will definitely be purchasing more for my son and even buy as gifts for others I know would like this product. I have also recommended to a few friends and family members too. It’s a great little toy, that’s fun and you can add to your collection too with other robots and accessories which is great. Anna Dillingsworth – Harrison 7 Years

After testing this we have been and purchased more…apart from Dex, we already have 4 additional Zibits living with us as well as 2 additional sets too. I would definitely recommend this to others. Good quality and brilliant value for money.