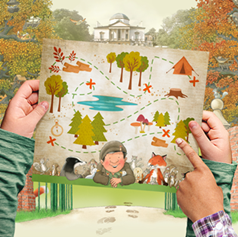 Join The Adventure In this Unique Interactive

This Autumn, be part of a live theatrical treasure hunt with Percy the Park Keeper as you help him get his animal friends ready for winter.  Forest school meets puppetry, world-class theatrical storytelling and clue-based adventure in this unique, non-stop 60-minute experience, designed especially for Chiswick House and Gardens.

Created by the team behind many of your favourite family friendly experiences, Autumn Treasure Hunt with Percy the Park Keeper opens on 14th October, playing throughout half term and up to 14 November.  Directed by Barney McElholm (Assistant Director Henry VI & Richard III at Shakespeare’s Globe directed by Sean Holmes and Ilinca Radulian, 1984 Histrionic Productions) the production is designed by Tina Torbey with puppets created by Marc Parrett for Grandly Strange (“Squirrel” at The Egg, Bath and “The Lion, The Witch and The Wardrobe at Leeds Playhouse).

Percy The Park Keeper works hard looking after the park and his animal friends who live there. But Percy still likes to find time for some fun and games. And, of course, in Percy’s Park, there’s always time for a story.

Bring your wellies and your family and get ready for a walk through the gardens with Park Keeper Percy and help him solve the clues. Can you help Percy’s adorable animal friends get ready for the winter months?  Oh… and has anyone seen Hedgehog…?

This is a theatrical live experience in the great British outdoors and is designed to go ahead in all weathers. Don’t forget to wear suitable footwear and outdoor clothing as children may get dirty whilst participating.

An alfresco café serving refreshments will be open before and after the Treasure Hunt.

Nick Butterworth is a multi-award-winning British writer and illustrator of children’s books whose books have been published in 30 languages worldwide, with international sales in the region of 15 million. His hugely popular series of books about Percy The Park Keeper has sold over 9 million copies and encouraged generations of children, especially in schools, to take an interest in, and care for, the natural world around them. With the ‘Percy’ books making it onto the reading list for the national curriculum, few children will not have encountered the genial Park Keeper.

Nick’s varied career has also included working as a graphic designer, presenter on television, carpenter, signwriter, printer and college lecturer in graphics and illustration. Nick and his wife Annette (also a writer) have been married for 40 years and have two grown up children, Ben and Amanda, and three grandchildren.

In 2009, Nick, Ben and Annette Butterworth formed Snapper Productions, a company set up to produce an animated preschool series based on Nick’s books about an alien called Q Pootle 5. The series is one of the top-rated shows on BBC CBeebies and is now on air, worldwide, in a hundred countries.

Wednesdays and Thursdays – From 2pm to 4.30pm

Friday to Sunday – From 10am

Peak (weekends and performances 25 to 29 October)

• English Heritage members – 10% off (upon presentation of your membership card)