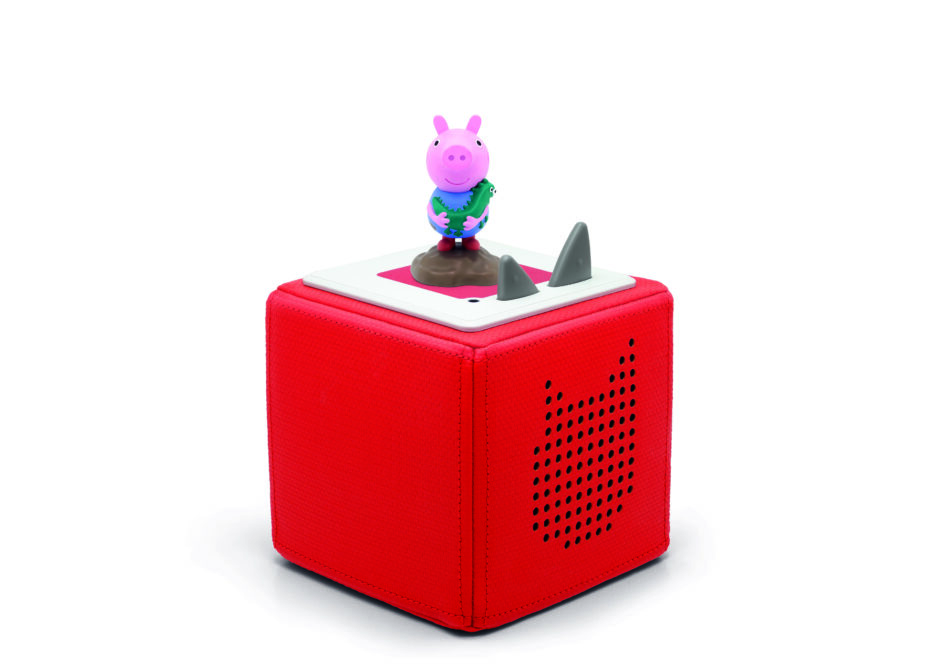 Peppa Pig makes an exciting return to tonies® with the launch of the eagerly anticipated George Tonie
narrated by John Sparkes. To the sound of applause and squeals from preschoolers all over the
country, the iconic kids’ TV show is back for another turn on the magical Toniebox with ten new
adventures little listeners will love.

Besotted Peppa fans will delight in the new George Tonie, which tells the story of George’s New
Dinosaur, among nine other adventures featuring fan favourite characters, Peppa Pig, Daddy Pig, Mr
Bull and more! Find out what happens when Peppa declares her house a desert island, or how
Grampy Rabbit flew to the moon and back. Will the China Shop be left standing after a visit from Mr
Bull? And what drama will unfold at the children’s fete? One thing’s for sure, there’s bound to be a
muddy puddle or two!

The Big Tale of Little Peppa

The Biggest Muddy Puddle in the World

Mr Bull in a China Shop

Pinky Laing, Partnership & PR Manager at tonies® says: “We’re thrilled to be welcoming George and
his little green dinosaur to our Tonies family this summer, giving preschoolers another magical dose
of Peppa Pig. Jam-packed full of fun from the popular kids’ TV show, George is set to be one of our
best-selling Tonies, following in the footsteps of his big sister.

“Peppa Pig is a global phenomenon and has played such an integral role in children’s lives for the best
part of 20 years so it’s an absolute pleasure to be able to host such iconic content on the Toniebox.”

There are two types of Tonies available:
• Content Tonies include both classic and contemporary tales and popular bedtime songs and
educational content, bringing the magic of learning to life.
● Creative-Tonies play recorded or pre-downloaded content which can be uploaded via the
Toniecloud or the free Tonie-App. Perfect for when kids want to listen to something a little bit
more personal. tonies® release free content for download every month.

The Tonies and Toniebox operate through a wireless digital system which connects to an NFC chip
within each Tonie using Wi-Fi. Each Tonie is beautifully hand painted, making them desirable and
collectible for kids