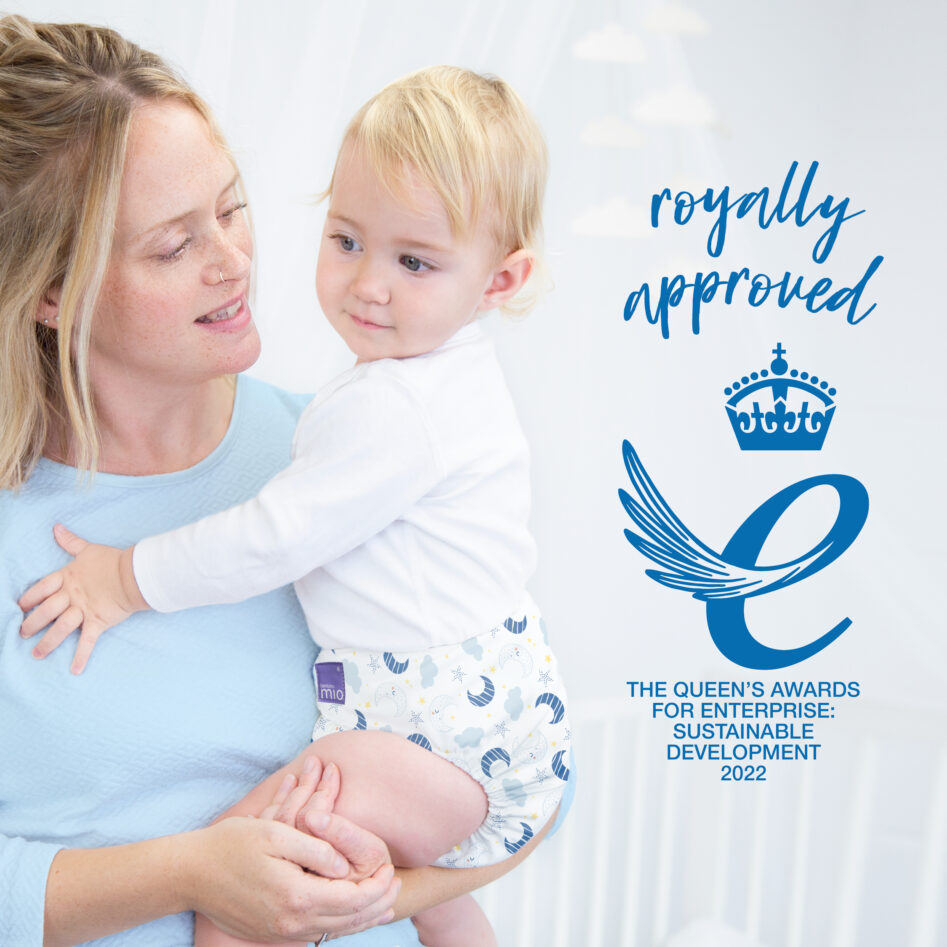 Announced Tuesday 21 April, Bambino Mio has received a royal seal of approval from Her Majesty The Queen as one of the UK’s most outstanding businesses.
The reusable nappy specialists have been honoured with a second Queen’s Award for Enterprise for Sustainable Development, recognising Bambino Mio’s commitment to sustainable development practices with a positive pursuit to make reusable nappies the first choice for parents to reduce the waste that single-use disposable nappies create.
Winners of the prestigious Queen’s Awards for Enterprise are all personally approved by Her Majesty The Queen. This year 226 UK businesses have been recognised for their contribution to International Trade, Innovation, Sustainable Development and Promoting Opportunity. Only 31 awards were given for Sustainable Development in 2022.
Previously, Bambino Mio was also awarded the ‘International Trade’ award in the Queen’s Awards for Enterprise in 2020 – celebrating the success of innovative businesses with outstanding achievements.

“Further royal recognition from such a prestigious awards body is something that our team is extremely proud of. This is another accolade that acknowledges to the world that we are committed to sustainable development practices and are on a mission to make reusable nappies the first choice to reduce single-use disposable nappy waste.”

Bambino Mio will be presented with the Queen’s award for Sustainable Development at a reception held at Buckingham Palace later this year. The award comes at the perfect time as Reusable Nappy Week approaches (24th April – 1st May), an international awareness campaign for reusable nappies. Launched in 2000 by the Women’s Environment Network, the week has gone from strength to strength with manufacturers, retailers, nappy libraries, councils, NGOs and parents all taking part to share the many benefits of reusable nappies. To celebrate the week Bambino Mio are running a sale of up to 40% off its entire range of reusable products.