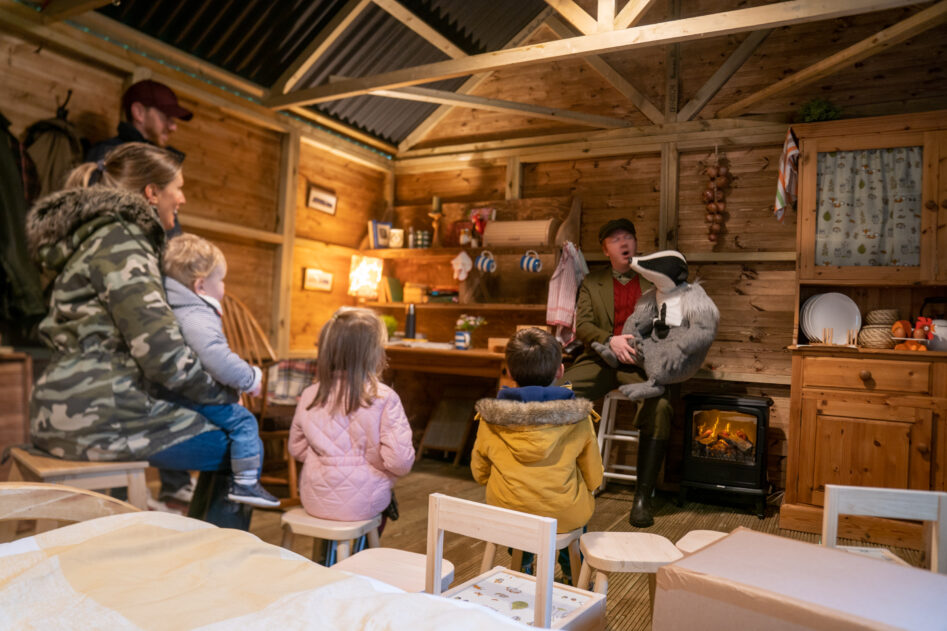 But London’s latest theatrical production offers kids a far more fun (and muddy) experience right in the front row of drama in nature. Autumn Treasure Hunt with Percy the Park Keeper is an outdoor extravaganza, where families can don their wellies and woollies to help woodland animals to bed down for winter in the gardens at Chiswick House and Gardens. The audience will travel around in small groups, uncovering captivating, intimate performances around the grounds by performers fresh from Shakespeare’s Globe and the West End stage. Animal puppets and Percy, one of Britain’s best-known children’s literary characters, need the kids’ help before hibernation sets in!

There will be no shushing at this show – and den-making, nature-spotting, and talking to the performers are all actively encouraged: “We won’t have any fidgeting at the Autumn Treasure Hunt as the kids don’t have to sit still!”, laughs Adam McKenzie Wylie, founder of Histrionic Productions, the immersive event-maker behind the show. “It’s fully inclusive, and rather than coming home full of energy having eaten too many sweets, the children will be absolutely knackered by the end, having walked halfway around Chiswick Gardens and seen an amazing show.”

After Covid-19 restrictions left so many children starved of time spent in nature, the outdoor setting was part of the production’s big appeal for Nick Butterworth, author of seven Percy tales which have sold over nine million copies worldwide. “The active production means children will be getting their hands and feet grubby rather than sitting with a tablet in their lap, and be out into the fresh air seeing real trees, not YouTube trees, and exploring – and learning from – nature too,” explains the best-selling author.

The show’s natural setting also takes Percy the Park Keeper back to where Butterworth’s story began. “The first Percy book, One Snowy Night, came to me on a walk with a dog in the park on a frosty winter’s day,” the writer explains. “The adventure first grew in the wonderful parkland in my imagination, and now it’s very special – especially after the time everyone has been through with the pandemic – that kids will to be able to enjoy a messy, immersive production, within nature itself.”

Butterworth has enjoyed a prolific career in TV, including penning children’s hits like CBeebies’ Q Pootle 5. But he says there’s something even more exciting about seeing his stories performed live right in front of children’s eyes. “The Autumn Treasure Hunt with Percy the Park Keeper will be different every time,” he predicts. “The audience will help shape it and the performers feed off the different reactions they get. It’s like when I go into schools and some of the children stick their hands in the air mid-story and you just know the honesty and freshness of their comment will be a treat!”

The outdoor setting also forms part of the narrative. “Setting a tale about a park keeper and his animals in a park gives us a huge advantage,” McKenzie Wylie adds. “We’re not asking people to suspend disbelief, we’re introducing them into the natural environment and helping them learn how to look after it.” Of course, being outside is also a safer environment in terms of minimising the risk of Covid-19: “we’re confident that the show can go on whatever happens this Winter, and having been desperately grateful for our parks and green spaces during Covid, it’s a privilege to be able to have Percy helping children learn how to look after the natural world.”

Percy the Park Keeper turned 32 this year (although you’d swear he was younger with his pink glowing cheeks) but Butterworth wrote up his latest adventures, A Flying Visit, which is published next month [NOVEMBER], during lockdown. “I saw the appetite out there for some escapism, a reminder of the big outdoors beyond the mundane lives that we have, and the joy that can be found in it,” he explains. Children can find that joy in bucketloads at the Autumn Treasure Hunt with Percy the Park Keeper (and rabbit, fox, and hedgehog too) – as long as they find the clues first.

Autumn Treasure Hunt with Percy the Park Keeper takes place at Chiswick House & Gardens to 14 November . Wednesdays and Thursdays – From 2pm to 4.30pm, Friday to Sunday – From 10am.  Tickets start from £15.