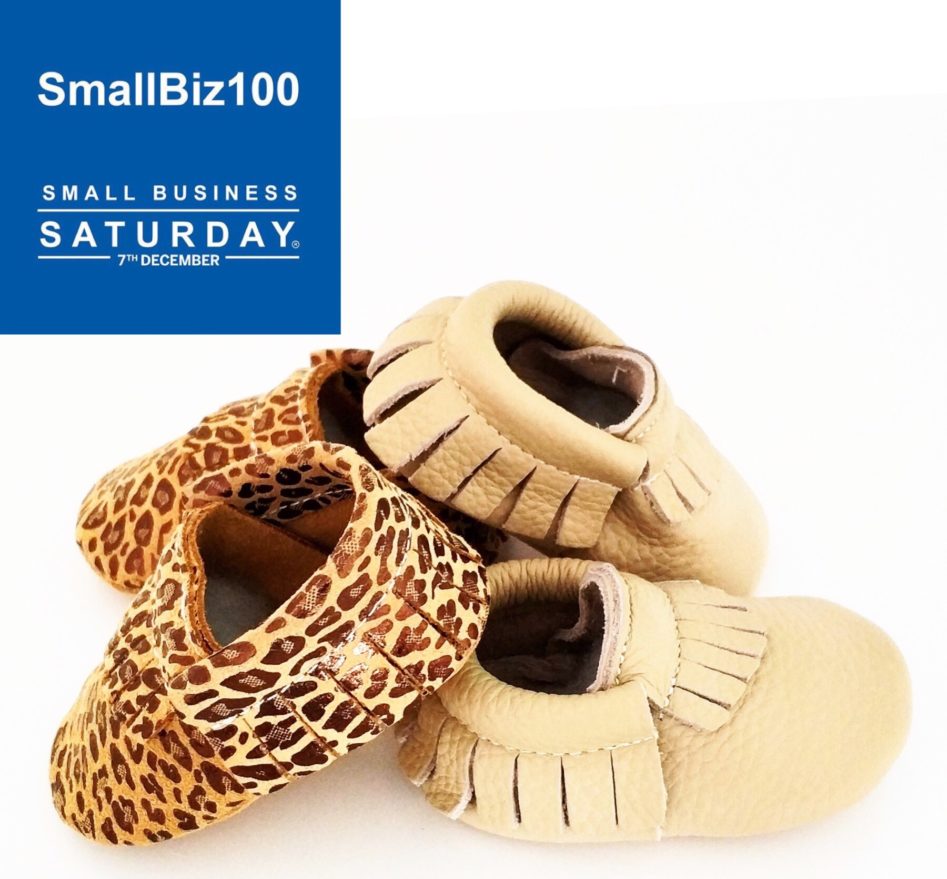 LONDON, 30 AUGUST: aidie London, a specialist baby footwear company from London, has been selected as one of 100 trail-blazing small businesses in the official count-down to Small Business Saturday, which takes place across the UK on 7 December 2019.

aidie London is one of this year’s ‘Small Biz 100’, a selection of small businesses drawn from every corner of the UK that reflect the vibrancy of the UK’s 5.6 million small businesses. In the 100 days running up to Small Business Saturday, the campaign will spotlight each of the Small Biz 100, as part of its mission to celebrate small business success and encourage the nation to ‘shop local’ and support British small businesses.

This year’s Small Biz 100 features a range of unique independent businesses each contributing to their communities and offering something different, including aidie London, founded in 2018 by Seffie Wells MSc. aidie London make the only Podiatrist-endorsed, specialist first walking shoes for babies & toddlers, designed by Infant Developmental Psychologists to actively support cognitive function in babies. Since their launch last March, aidie London have won a host of awards for their outstanding product design, including a personal invite from the prestigious German Design Board to the German Design Award 2020 with a nomination for outstanding product design & named FSB’s Start-up Business of the Year during their May annual ball, an event featuring speeches from Prime Minster Theresa May & Chancellor of the Exchequer, Phillip Hammond.

aidie London joins hundreds of previous Small Biz 100 businesses, which have been announced by the iconic campaign since its UK launch in 2013.

Day one of the Small Biz 100 count-down kicks off with The Butchers Social, from Henley-in-Arden, Warwickshire, with aidie London being placed in the spotlight on 12th October 2019, where it will be celebrating by offering discounts & promotions. The campaign will run for 100 days, culminating with a visit to the House of Lords in December.

“After winning two awards in the last two weeks, we’re incredibly excited to be part of this campaign. We’ve already achieved so much since our launch last March, being a SmallBiz100 is one more step in our company’s growth and an amazing opportunity for us to be recognised along with some of the UK’s finest small businesses.”

“Each year this campaign has grown in support from government, business and communities alike, and so we can’t wait to begin the annual 100-day countdown to Small Business Saturday with the launch of the Small Biz 100 2019.

“Small Business Saturday’s increasing popularity means it was harder than ever to choose just 100 of this country’s incredible 5.6 million small businesses to showcase, but we believe those we have chosen are true representatives of the diverse, creative and inspiring heroes at the heart of our communities.”

In its seventh year, Small Business Saturday is the UK’s most successful small business campaign, which last year saw an estimated £812 million spent in small businesses across the UK on the day, according to research commissioned by founder and principal supporter American Express.

This was up from the £748 million spent on Small Business Saturday in 2017, with 59% of people aware of the day saying they spent more than usual.

The #SmallBizSatUK campaign trended in the UK top 5 on Twitter on the day, reaching over 100 million people globally.

The Prime Minister, the Chancellor of the Exchequer and the Mayor of London were among those publicly supporting the campaign, alongside more than 90% of local councils.

Small Business Saturday also benefits from the backing of leading business organisations including the Federation of Small Businesses, Indeed and Dell. The campaign is also supported by Amazon, printed.com, Square and Xero.

Small Business Saturday 2019 is open to all businesses to participate in and will commence its regional bus tour roadshow across the UK during the autumn, to drum up further support.

A grassroots, not-for-profit campaign, Small Business Saturday was originally founded by American Express in the U.S. in 2010. American Express remains the principal supporter of the campaign in the UK, as part of its on-going commitment to encourage consumers to shop small.

The day itself takes place on the first Saturday in December each year, but the campaign aims to have a lasting impact on small businesses.

On Small Business Saturday, customers across the UK go out and support all types of small businesses, online, in offices and in stores. Many small businesses take part in the day by hosting events and offering discounts.

More information on Small Business Saturday can also be found at: