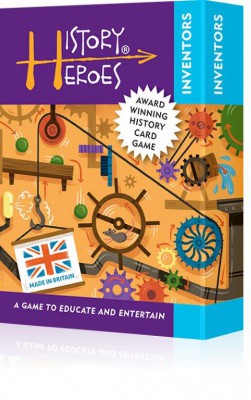 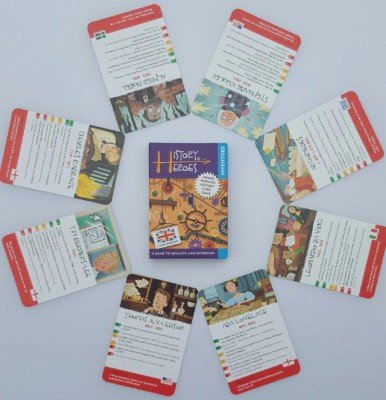 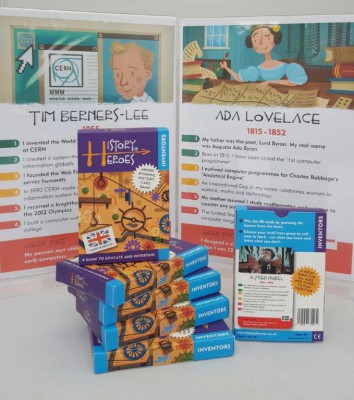 History Heroes: INVENTORS – an award winning  game to educate & entertain:
40 of the most significant inventors in history on beautifully illustrated cardsWin the cards by guessing the heroes from the facts read out from the cards. Choose your level of fact from green to red: easiest to hard. A great game for all ages and stages to play together. Discover how much you know and learn what you don’t.

History Heroes: INVENTORS  is a History Heroes card game containing individual cards of 40 inventors, who have changed  our world with inventions we see and use every day. Each card is fantastically illustrated to represent the specific Inventor and shows their dates, their flag of birthplace and seven memorable and often moving facts about them.
INVENTORS: Alfred Nobel
Which inventor, most commonly linked with a peace prize, was the brains behind dynamite? The answer: Alfred Nobel. INVENTORS: Alexander Graham Bell
Did you know that Alexander Graham Bell, inventor of the telephone, received his well-known middle name as an 11th birthday gift from his father?  And, whilst most might know that Florence Nightingale was the founder of modern nursing, how many realise that she is also credited as the inventor of the mathematical pie chart? Test yourself with these facts and many more in the game.
Buy History Heroes Inventors here
£9.99 Available to purchase online www.historyheroes.co.uk
Bizziebaby Bronze Award Winners 2016 – Card Game Category

The packaging looked great; graphics were clear and the texture really nice. Thought it was quite cool and eye catching. Concept of this game is extremely straightforward. An educational version of top trumps. My son struggled at the start but quickly got hang of it. A lot of the characters hadn’t heard of let alone my child so was difficult for him to keep a constant focus. We gained a better understanding of
characters and important people from the past. Most we hadn’t heard of before. The game would be simple to understand, but some if not all the characters I have not heard of. I think this game would be difficult for adults, let alone children. The concept was great. Just limited knowledge on characters. We are a competitive family so it fitted in well. Extremely good game which we all learned from as we played. Good quality and value for money. Could always be cheaper but at £8.99 it isn’t too much. £5.99 would be good or even £5. Would purchase this for train/plane journeys or going on holiday type of vacations. Would recommend for some of our friends that are quite knowledgeable. Enjoyable product, great packaging. Just some of the characters are a little unheard of. Christopher Hill – Teddy 8 years

This looked very appealing when arrived. Loved the style of the packaging and everything you need neatly packed in box. The concept of the game is easy enough to understand and explained well. All the family understood the game except our youngest, took him a while to grasp this game. This was very stimulating and many of the inventors even we had not heard of. Great to find out about who’s who and what they invented. It educated the whole family. As a large family we do play a lot of games together so all well versed in taking turns and working as a team. This was extremely educational for the children and us adults. Personally I think the game should be aimed at older age group as feel 8 years is a bit young due to the complexity of the inventors and the history behind them. We all had a lot of fun playing this game as a family and with friends when they popped over. This is very high quality and detailed and informative and educational game. Would consider purchasing as a gift. Also think it is a great game for all the family and ideal to bring out at parties
and Christmas. We have already recommended to friends and family. A fantastic family game which taught all of us a lot about inventors. Janice Kingsley – James, Harry, Coco & Julie – 9, 10, 13 & 15 years

My initial impression was that it was well packaged and looked interesting. The cards came in a sturdy box which made it clear what the product was about. The concept was quite straightforward. My child had no problem understanding the concept. The game unfortunately did not hold my child’s attention for more than a few minutes. Like most 9 year olds, his knowledge of inventors is not extensive. He had not heard of most of the people on the cards and became quickly frustrated at his lack of knowledge. I felt this game was more suited to Secondary School aged children and adults and by that stage counting, turn taking etc. is well established. My 9 year old simply did not have the knowledge needed for this game to be enjoyable. We did enjoy leafing through the cards and learning about
some of the inventors but not playing the game as such. The cards were good quality and there was a lot of information on them. If your child has a particular interest in inventors or is older and has a good knowledge of inventors then the price is a fair one. Personally I feel this is more suited for children 12 years plus. I think this item is suited to older children and adults and would not appeal too many under 12s. Susan Allan – Jack 9 Years

Would purchase this for train/plane journeys or going on holiday type of vacations. Would recommend for some of our friends that are quite knowledgeable. Enjoyable product, great packaging. Just some of the characters are a little unheard of.