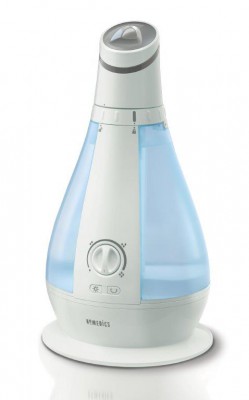 The Ultrasonic Cool Mist Humidifier brings a cool and refreshing breathing experience to your home. The innovative on/off oscillating head allows you to choose between 120° motorized oscillation or a target nozzle in one fixed direction. Just one gallon of water gets this humidifier running for up to 48 hours. It even comes with a built-in night light.

Bigger than expected but looks great as an accessory in the room, especially with the optional nightlight. Well packaged, wasn’t worried about anything being damaged due to this. Very clear and easy to follow instructions, we didn’t have any problems setting up or using the humidifier. I don’t have any concerns about the quality as all of the plastic is sturdy. There are no parts that I’d be concerned about wearing except the obvious hard water filter, which is replaceable for that reason. Looking on line there are a lot of cold mist humidifiers that are a lot cheaper than the RRP of nearly £80. However, most of these appear to be a lot smaller which would mean constant filling. I would be looking out for deals on this machine. I would purchase due to how well Lily has slept through the night since we have used it. She used to occasionally wake through the night, however, she hasn’t once yet since we have used the humidifier even though she has had constant colds for the last couple of months. It works well with the various speed settings, is easy to use and looks good. It is also quite quiet. Lily is used to going to sleep in a silent room, but has not been disturbed by the faint hum. Even turning the machine up to the highest setting it doesn’t increase the hum. It is almost like white noise so is quite soothing. Very happy as it means we are all getting more uninterrupted sleep! It is bigger than some other humidifiers available on the market, but it holds a lot of water so it can operate several nights without needing to be refilled. It is taller than it’s wide, so doesn’t take up too much space on top of the drawers. It looks stylish and the night light gives a nice soft blue glow. The oscillating head works to just under 90 degrees so can sit in the corner of the room without worrying that it is spraying the walls. The squirt of water is a constant stream (it doesn’t splutter) regardless of which of the 4 settings it is on. The amount of water varies a lot between the lowest & highest setting. The only negative feedback I would give is that it wasn’t obvious how to stop the machine the first time as my partner had switched it on the night before. On the dial it shows 1 to 4 dots for the speed setting but it wasn’t clear I should turn the dial further left to switch it off. Now I know that there are no issues. Caroline Myers – Lily 14 Months

The design is great and very modern, but larger than I expected. The humidifier arrived boxed, with a very handy carry handle on the top. It was easy to carry out to my car and when opened was securely padded to ensure safe transit. Instructions were also the first item on show when the box is opened which I thought was a nice touch. The branding and images on the box were pretty inviting and showed all the features clearly. Once I actually found the English version in the booklet, it was all very easy to understand with clear diagrams of the parts and clear set up instructions. There were also hints on dealing with soft or hard water and FAQs for things which might occur the first few times the humidifier was in use. Much bigger than I expected it to be, but very solid and well made. You wouldn’t be able to
knock it over easily and even when it was on the floor our 5 year old wouldn’t have been able to budge it. The mist is cool but not super wet when you put your hand through it and even on the lowest setting quickly fills the room. The night light is soothing and not too bright although the water movements create patterns on the wall which might not be great for anxious children. I also tried using a few drops of lavender and eucalyptus oil in the water which worked amazingly well and the scent lasted – a useful additional feature as an air
freshener. My only slight complaint is the noise; we had to place it on the floor because if you have it high up the noise is very noticeable. However, when placed in a corner far from the bed on the floor it wasn’t much of an issue. It could easily be placed on the landing with open doors and still have provided enough mist to make a difference. It is quite expensive but if you or your children often suffer from allergies or tonsillitis/flu or if you have your heating on high quite often it’s well worth the money and one unit would easily humidify a small to medium size house on its own. I was impressed with the power usage as well. Hardly used any electricity and could safely be left
on all night. I didn’t think it would make such a difference but once you use it you wonder how you lived without it. I would certainly recommend. I used it in our 5 year olds room when she had a slight cold and my partner and I used it for a couple weeks as I suffer allergies and he snores. Worked an absolute dream on all 3 of us. I woke up consistently with moisturized eyes, nostrils and mouth and both my partner and I slept better when we had it on….me mainly because he wasn’t snoring! Hannah also had much easier breathing when I checked on her and woke up slightly better after each day I had it on in her room. She also loved the night light. Sarah Jason – Hannah 5 Years

It was a lot bigger than other humidifiers I have used. Is quite an unusual shape which made it look intriguing? Very impressed with the night light. Packaging shows exact replica of what the humidifier looks like. It’s clear bright and appealing. Inside the box the humidifier is well and safely packaged. Instructions are great if you read through them properly but I had to read them three times to understand what order the humidifier went together. Example the instructions tell you to add water into the base then goes on to explain how to put the base together and that the cartridge goes in beforehand so it actually is telling you to do something before you are meant to but this
wouldn’t happen if you read the instructions fully before setting up, rather than reading it step by step as you are going along. Quality of the product is fantastic. It is well thought out, and made. It truly fits the needs of either an adult or child who may need to use this. I think £79.99 is very expensive for a humidifier when there are so many out there that do the same job however this humidifier has the little extra touches and considerations, i.e. controlling steam, night light, safety capacity. I would definitely purchase it has been of great benefit to my son and myself. I would highly recommend. The homedics ultrasonic humidifier has been of great benefit to my son and myself. My son’s room only has a little radiator and gets very cold through the night so we use an electric heater as well which heats up the room but also makes it very dry so we placed the humidifier in the room and my son stopped waking himself through the night with dry coughing. The humidifier has a little night light on it which is handy for children and also it automatically switches off when the water is finished. Initially I was a bit worried about leaving it on all night because I like to have all plugs and things switched off but I knew I would have to test the function off and left it on in my room all night and sure enough when I had woke up in the morning it had switched off. I also used it for myself in my bedroom when I was waking in the morning with sore and dry throats the humidifier helped moisten the air. For the size of the humidifier you would expect it to be noisy but it wasn’t it does let of a dull noise but nothing that kept my son or my partner and I awake. Overall I was extremely pleased with the product and would recommend it. Louise Tosh – Isla & Niall 4 & 2 years

It works well with the various speed settings, is easy to use and looks good. It is also quite quiet. Lily is used to going to sleep in a silent room, but has not been disturbed by the faint hum. Even turning the machine up to the highest setting it doesn’t increase the hum. It is almost like white noise so is quite soothing. Very happy as it means we are all getting more uninterrupted sleep!