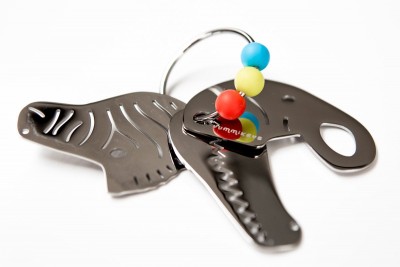 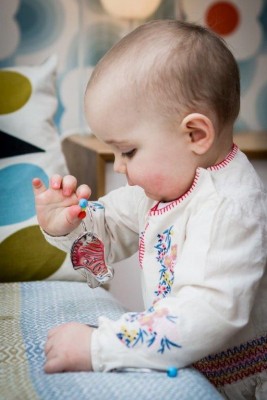 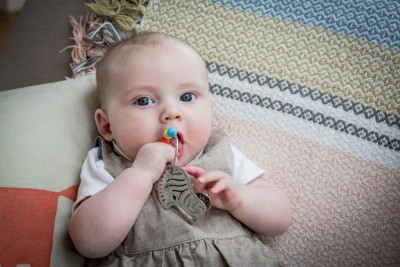 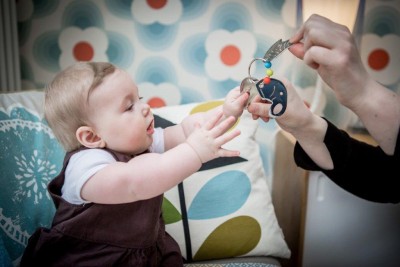 Yummikeys – Stainless steel teething keys with silicone beads
Yummikeys are a set of three jingly, sensory animal keys with three colourful silicone beads. Yummikeys are made from stainless steel 304 (the very same material as your cutlery). They are cool on teething gums, beautifully-designed and provide jingly fun with built-in baby appeal. They’re also safe for newly emerged teeth. Yummikeys are a safe, hygienic alternative to real keys and last but not least (as we know to our cost), should your baby mislay them, you will not have to change the locks!Now for the serious stuff:For babies who can sit independently – 10 months +Dishwasher friendly BPA, lead, cadmium and phthalate free 100% stainless steel. Tested in an independent laboratory – CE and EN71 Designed in Edinburgh, made in carefully chosen factory in China Cotton bag included

My wife and I were a bit concerned about it as it
looks like it could maybe damage my daughter’s mouth but after handling it you
realise it is perfectly safe. Packaging was
nice. Quite appealing, if I saw it on a shelf I would probably pick it down to
look at it. Instructions easy to read and follow. I liked the idea. My
daughter has a few chew toys and they go down quite well with her. My
daughter had no issues handling them.
She is able to swing them about quite easily. It is hard to tell
with Ellie whether it was effective. She is one of those babies who never
complains and you can’t really tell if she is having any issues with her
teeth. Initially she did like it, like all of her teething rings/toys etc.
though she stopped playing with it after a few weeks.Looks and feels like
a great quality product. Quite impressed with it. Although Ellie initially liked it, it has
joined a lot of other stuff where it hardly gets touched. Price is a bit steep
for something not to be used a lot. I found that even £6 teething rings from
Tesco were eventually discarded so why pay £25 for something that is going to
go the same way. I liked the
look of the overall product. Something smart and clean looking about it.I personally would not buy this item. Not
that I didn’t like it but as I said earlier. If it’s going to be used just as
much as a £6 teething ring from Tesco then what one would you choose. I
would recommend as Ellie liked it and I liked the look of it. Another child
might find it helps them more as teething may be more of an issue.Great Packaging, attractive looking
toy, if I had carte Blanche to buy anything I felt like then I would probably
buy it if I saw it on the shelf but seeing as the wife controls the purse
strings I think I would be buying the £6 one from Tesco. Douglas Rae – Ellie 1
Year

Well packaged, smart looking, well made. Adequate
packaging, suitable design. Instructions
pretty self-explanatory. They’re
a good idea. Though best suited for older teething babies, I did wonder
about the choice of material to make them as it’s not advised to use metal
cutlery until the child reaches pre-school age. The ring is a little small but easy
enough for my son to hold. Mainly used for fun due to the jangly noise
they make. When used for teething this was in conjunction with a liquid
product. My son had fun shaking them. Well-made and
nice quality. With a £24.99 price
tag it’s a bit more luxury brand. I really liked the ease of use, ease of cleaning and storing,
handy size. Well made. I personally would not buy these as I feel the
price tag is quite a high price for a teething toy. I would recommend as these are very good
quality. Good quality product but price
tag lets it down. Hayley Taylor – Jack 1
Year

Looked interesting product when arrived. It came in a very appealing box and was lovely
in a little bag. Instructions clear and
to the point. The idea is good as
keys are a go to for a lot of teething babies and this way they feel as though
they have their own keys. My child found these very easy to hold. I would not say these were effective as
teething aid as my son was not too interested in putting these in his mouth. He did enjoy using as a toy as it made him
feel like he had his own set of keys. Quality was
fantastic very durable. I
personally wouldn’t pay this much for a teething aid especially as my son
didn’t really benefit from it. The product was good as a toy but not much
else for us. We would not purchase this
as was not used as teething aid. I would
not recommend as feel expensive for a teething aid. Fun as a toy but not as a teething aid. The
product was very well made and durable but for us personally did not offer any
benefits. My son was 17 months and already had a lot of teeth but has more
coming through. He wouldn’t really entertain putting these in his mouth he
just used them as a toy. Laura Rigby – Son 17 months

I would recommend as Ellie liked it and I liked the look of it. Another child might find it helps them more as teething may be more of an issue.Great Packaging, attractive looking toy, if I had carte Blanche to buy anything I felt like then I would probably buy it if I saw it.